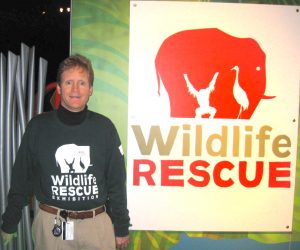 Love to learn about wild animals?  Then you should visit the Wildlife Rescue Special Exhibit at the St. Louis Science Center.  It is a temporary traveling exhibit that will be there until March 3, 2013.

I have worked at this exhibit since October 24, 2012, a few weeks after it debuted at the St. Louis Science Center.  This exhibit is designed to be fun, hands-on and educational all at the same time.  It is geared for all age groups, so please bring your kids to see this.

As you enter and leave the exhibit, you are greeted with a video of renowned wildlife advocate and one of my heroes, Dr. Jane Goodall.  She welcomes you with this message of hope and optimism: 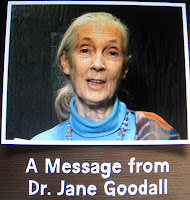 “Today we here so many stories of doom and gloom, how animals are becoming extinct and how environments are becoming uninhabitable, and how the diversity of life is diminishing.  And, so it’s really important to understand that we can rescue wild animals.  We can restore their habitats and that we can work together to protect biodiversity.  That the amazing diversity of species that makes up life on planet Earth that makes up an ecosystem.  As you go through this exhibit, you will learn some amazing stories of animals being rescued from the brink of extinction, habitats restored, and the amazing people who have dedicated their lives to making this happen.” 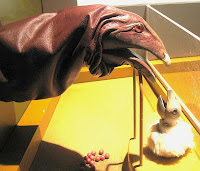 Kids and their parents love the hands on interaction of the exhibit, such as using an arcade game puppet to try to feed a mechanical California Condor chick, a device comparing your grip with an orangutan, a scale that compares your weight with a giant panda, etc.    Even more, you will enjoy the interactive quizzes testing your knowledge of elephant behavior and saving wildlife from oil spills, forest fires, and floods. 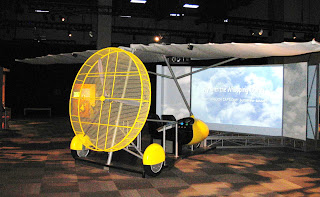 To learn about the rescue of whooping cranes, there is a full scale model of a “trike airplane” with a large screen in front it.  Trikes are ultra light planes that look and fly like hand gliders.  You sit inside the plane and feel like you are flying to teach immature Whooping Cranes how to migrate from Maryland to Florida in the autumn.   This video is narrated by Joe Duff, the lead pilot and co-founder of Operation Migration.  The pilot and the plane are disguised to look like a mammoth Whooping Crane in order to entice the juveniles to learn the eastern migration route.  I frequently watch the video with envy wanting to fly a trike, while teaching the majestic Whooping Cranes to migrate long distances. 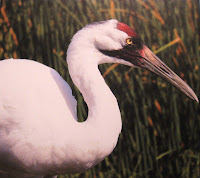 The exhibit provides amazing statistics on the recovery of animals that came within a whisker of going extinct.  For instance, Whooping Cranes had only 15 individuals left in 1940.  Thanks to the efforts such as volunteers like Joe Duff, conservation groups, the Endangered Species Act, and the Fish & Wildlife Service, around 600 Whooping Cranes now exist.  Even more remarkable, The Chatham Island Black Robin had only one breeding female left named, Old Blue in 1980.  To save this species, the New Zealand government began to breed Old Blue with a male robin, Old Yellow.  This pair produced 11 chicks; more than 250 of their descendants now live in the New Zealand wild.

An exhibit animal that I have seen personally in the wild: The California Condor.  This species had only 25 birds left in the 1980s.  Fortunately, the last remaining birds were captured, raised in captivity, and now many released back into the wild.  Because of those efforts, around 350 birds can be seen in the wild.

I was fortunate to see California Condors when I traveled to the Grand Canyon in 2009 and 2010.  They are huge with their 10 wing span.  As a matter of fact, they have the largest wing span of any bird in North America.  They were easily to spot with the large identification research numbers clipped on their wings.  You can also readily see them by their massive size and the large white patches on the underside of their wings that are seen when they are in flight.

When I lived in Florida for 16 years, I also saw Whooping Cranes and Burrowing Owls, both of which have displays in the exhibit.

When you visit this exhibit, don’t skip the seven minute inspiring video, “Return to the Wild,” shown on a large screen theater inside the exhibit.  It talks about the fight for survival of the Orangutans of the rain forests of Borneo and the elephants of the African savannas.  Elephants struggle to survive with the poaching of their ivory tusks and humans encroaching into their habitat.  Clearing rain forests to create palm oil plantations are threatening the survival of orangutans.

Fortunately, both species have human champions who are fighting for their survival.  On the island of Borneo, Indonesia, Dr. Birute Galdikas runs The Orangutan International Care Center, which cares for around 330 orphaned orangutans.  Dame Daphne Sheldrick runs The David Sheldrick Elephant Orphanage at the edge of Nairobi, Kenya, which cares for dozens of orphaned elephants.

The video shares failures and success stories of raising these orphaned and often traumatized animals in captivity and releasing them back into the wild.

What really struck me was the ending statements of both of these heroes for our planet.

Dr. Biruté Galdikas:  “I hope people really carry away the understanding how funny, benign and great orangutans are, but, also the realization that they need to be saved from extinction and only we can do it.”

Dame Daphne Sheldrick: “I think everyone really should be aware of the natural world and do everything they can to protect it.   You understand it is not just you in the world.  You are part of a much bigger thing.  It goes round and round and every single species contributes to the well being of the whole.  It is the only place we have and we have got to take care of it.”

Gandhi once said, “The greatness of a nation and its moral progress can be judged by the way its animals are treated.” 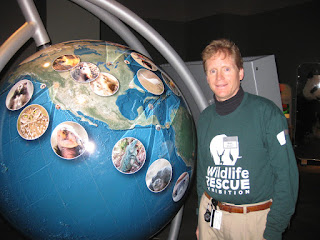 Even more, this exhibit shows you can have success bringing animals back from the edge of extinction.  It provides us hope and inspiration while challenging us to listen to our better angels.

Often visitors leaving the exhibit will rush past and ignore the final video by the exit.  They are eager to get to the Omnimax movie, Planetarium, or head home.   Resist this urge and stop to watch the video.  It contains one final video message from iconic Dr. Jane Goodall.  She states:

“Now that you have been through this exhibit, you’ve learned the importance of rescuing animals, restoring habitats, and protecting biodiversity.   I can’t overemphasize enough importance of each and every one of us getting involved to protect life on earth.  It’s just so important that we get together to do this now. ”

Yes, this is the mission for the rest of our lives.  Each and every one of us is called to save the planet from climate change, pollution, and habitat loss.  If we accomplish this mission (and we can!), the elephants, orangutans, Whooping Cranes, California Condors, black footed ferrets and so many other endangered animals will thank us.  Not with words, but their presence on this planet will continue to touch our hearts.