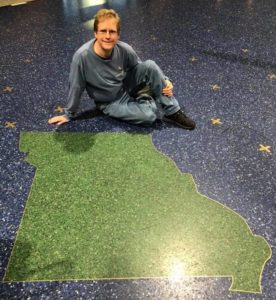 Looking for a great way to promote climate action? Speak at your old college and high school.

This is exactly what I did when I embarked on a speaking tour across his home state of Missouri from October 8 to 17, 2018. During his tour, I spoke at My alma mater William Jewell College (class of 1992), University of Missouri in Columbia MO, St. Louis Community College, Oakville High School in St. Louis (I graduated from Oakville in 1987), and St. Louis University.

I am a native St. Louis resident, born there in 1968. My wife, Tanya, and I moved to Portland, Oregon in 2017. Upon graduating from William Jewell College in 1992 with a degree in Business Administration, I became a seasonal park ranger for 25 years at Crater Lake National Park, Oregon and Everglades National Park, Florida. While working in these national parks, I discovered climate change negatively impacted these international treasures. 10 years ago,  I became so alarmed I made it my life’s mission to take action on climate change. I quit working my winter job in Everglades National Park in April 2008. I still spend my summers working at Crater Lake, but I decided to move back to my home of St. Louis during the winters to start public speaking, organizing, and writing this blog about climate change. 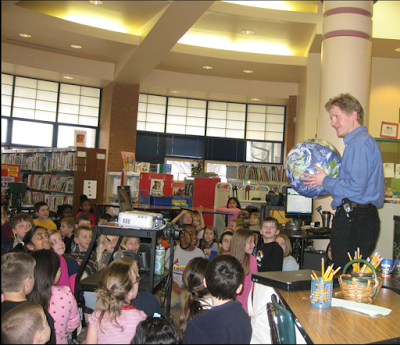 One of my first public climate change talks, speaking at my nephew Sam’s grade school in February 2010.

During those winters in St. Louis, I made the first steps down this path as a climate change organizer. I started giving my own climate change talks and created this website in the spring of 2010. I joined South County chapter of Toastmasters International to become a better public speaker in January 2011. I worked at a climate change exhibit at the St. Louis Science Center from March to May, 2011. and I co-founded the Climate Reality St. Louis Meet Up group with local businessman Larry Lazar in October 2011. During these meetups, the St. Louis chapter leader with Citizens’ Climate Lobby (CCL) encouraged get in involved with CCL in St. Louis in 2012. In addition, I became trained as a Climate Reality Leader in San Francisco in August 2012.

Since 2012, I have given over 200 climate change talks as a seasonal park ranger, Toastmaster, Climate Reality Project Leader, and a volunteer for CCL. With all of my speaking, writing, and organizing on climate change, I caught the attention of my alma mater William Jewell College last year. In December 2017, William Jewell College formally invited me to give their Truex Economic Lecture for October 9, 2018. For my topic to address an economic solution to climate change, I chose to speak on a topic I know well: The Conservative Case for a Carbon Tax. I have given this talk around Missouri since 2014, emphasizing CCL’s carbon fee & dividend is the best market based solution to address climate change. 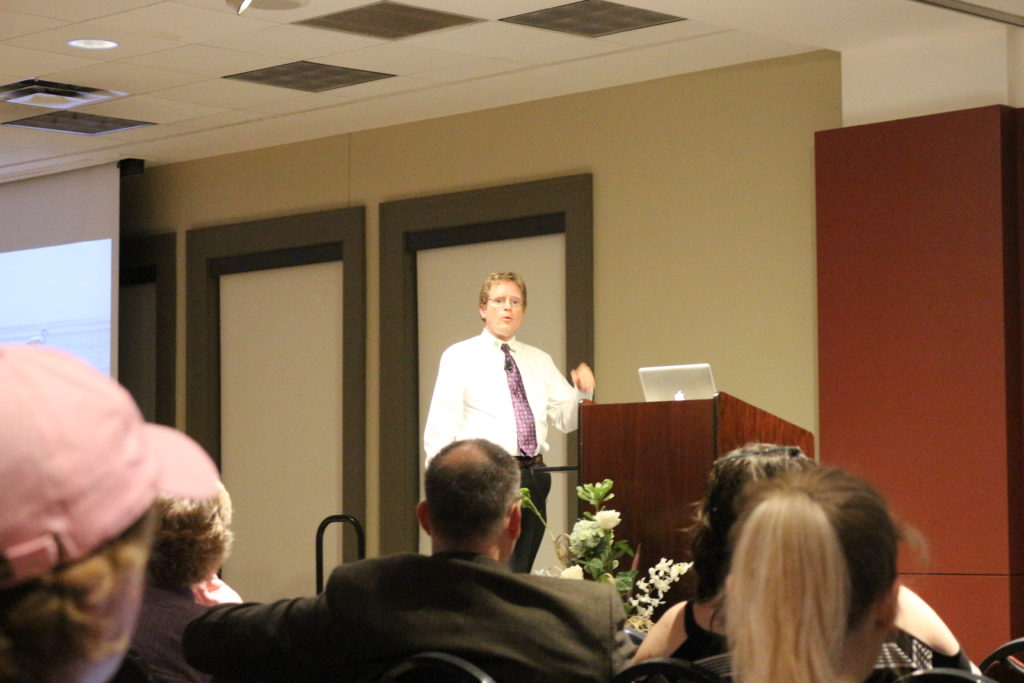 An audience of over 220 William Jewell College students, faculty and nearby community members came to this talk. The professors of economics required their students to attend my talk to write a paper afterwards on their thoughts on carbon fee and dividend as a solution for climate change. During this talk, I encouraged the students to take action by getting involved directly with CCL or Citizens’ Climate Higher Education. I invited volunteers from the Kansas City area group of Citizens’ Climate Lobby to attend. 3 local CCL volunteers attended, included Kansas City area group leader David Mitchell. It was great to see Dave again since I was his mentor at the Climate Reality Training in Chicago in 2013. These local CCL volunteers handed out flyers and sign up sheets to encourage William Jewell students, faculty and local community members to get involved with CCL.

I was very thrilled with my talk since I was able to cover my life since graduating from William Jewell as a park ranger and climate change organizer. Old college friends came to my talk such as Valerie Adair Gallup and Lester Morris. Penny Mahon, my mentor from 2012 San Francisco Climate Reality Training, attended. The college recorded the talk and loaded on YouTube. My microphone did not work that night, so you do have to listen very closely to hear my audio on the video. However, I was still very happy with the result watching the video recently.

A Jewell professor passed along to me positive comments from the students, such as:

“I liked that he used his talk to spread awareness of climate change and I learned that people are taking action to fix things. Climate change is a big deal and its only going to get worse without change.”

“As a student at Jewell, I have learned to think critically, but more importantly differently than others. It seems that Ettling, a Jewell graduate, was making a call to action for Jewell students to take their liberal arts education and make the change that people seek to see in the world.”

“I learned a lot from this Truex Lecture, and it is my favorite one I have attended as student here at Jewell. I was inspired by what Brian had to say, and will make an attempt to impose these ideas on my elected officials, to hopefully make a change for the better, and a change for the future.”

In addition to that lecture, the William Jewell professors teaching the Ecology Class, Immigration Class, Outward Bound Leadership Class, and Philanthropy Class asked me to be a guest speaker in during their classes on October 8 & 9th. They asked me to speak about my experience as a park ranger and how this motivated me to become involved in the climate movement. A highlight for me was giving a climate change talk for the Immigration Class to talk how my understanding how global warming is making the global refugee worse. 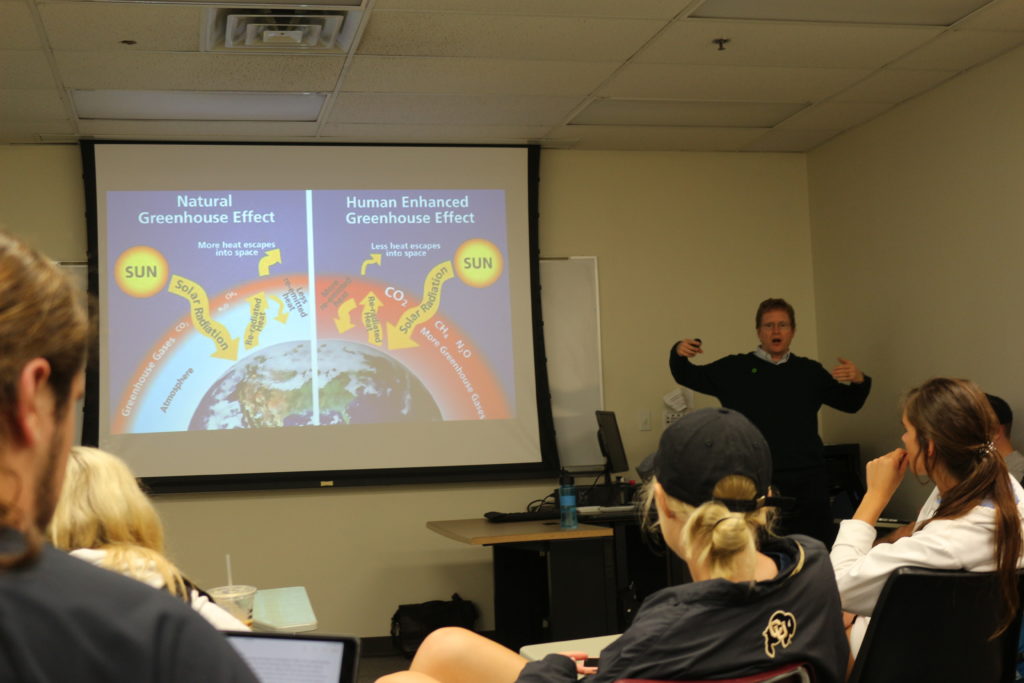 Ironically, in December 2017, around the same time that William Jewell asked me to speak on their campus, University of Missouri (MU) in Columbia MO invited me to come to their School of Natural Resources to speak on climate change. A doctoral candidate & research assistant at the MU School of Natural Resources, Lisa Groshong, heard me speak in Jefferson City MO in March 2017. She asked me to speak on the same topic that I spoke about in Jeff City: Is Climate Change Impacting Our National Parks? Over 45 MU students, faculty members and community members attended this talk at MU on October 10, 2018.

From the December 2017 invitations from William Jewell and MU, I had the beginnings of a tour across Missouri. My next step: I approached St. Louis Community College to allow me to teach a 3 hour Climate Change 101 continuing education class for the local St. Louis community residents to learn about this issue. I started teaching this class in October 2012. I taught that class every fall since then, except for 2017 when my wife and I moved to Portland. 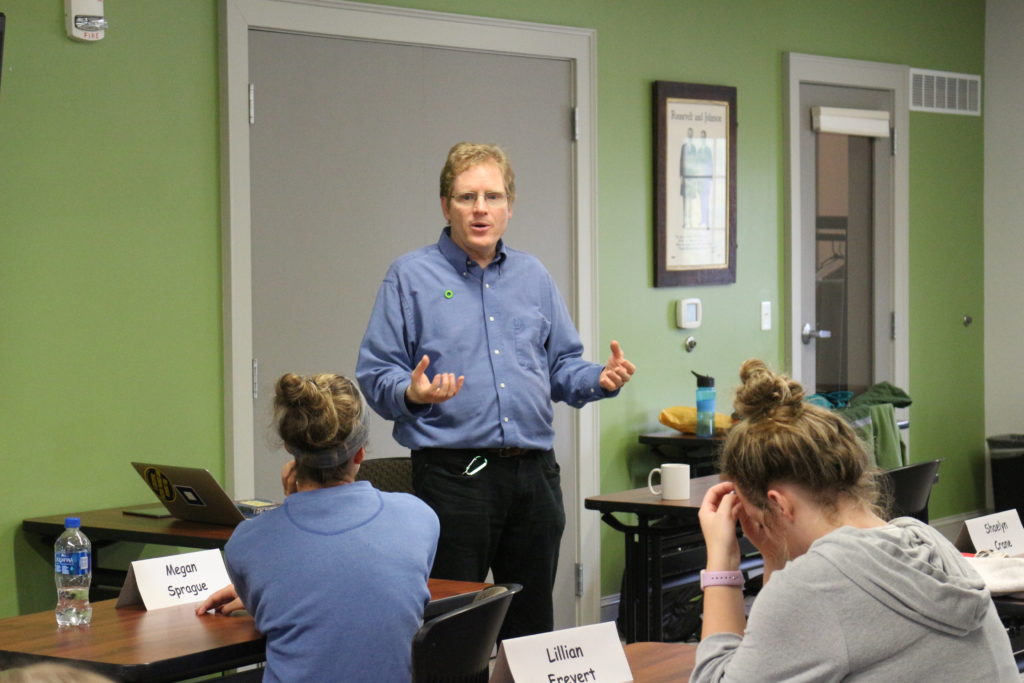 For this 3 hour class on Saturday, October 13th, I taught about the science and threat of climate change. I then spent a lot of time in the class focusing on solutions on what they can do. Specifically, I asked my class attendees to get involved with Citizens’ Climate Lobby. 11 people attended this class. They were so inspired by my information that everyone in the class filled out CCL constituent comment forms. On these forms, the students asked local member of Congress, GOP Rep. Ann Wagner, to take action on climate change and join the House Climate Solutions Caucus.

In organizing this tour, I was not satisfied teaching my old class at St. Louis Community College when coming back to my home town. In August 2018, I reached out to the high school I once attended, Oakville High School (class of 1987), in south St. Louis County, to ask if I could give climate change talks to the students. The school principal and the Head of the Science Department responded to my offer with much enthusiasm. The teacher who chairs the science department at Oakville High School asked me to speak 7 times for 2 days from October 15 & 16 for groups of high school students ranging in size from 100 to 200 students. I ended up speaking to around 1,000 high school students at Oakville High School. The theme of his talk was Caring for the Earth is Up to You! 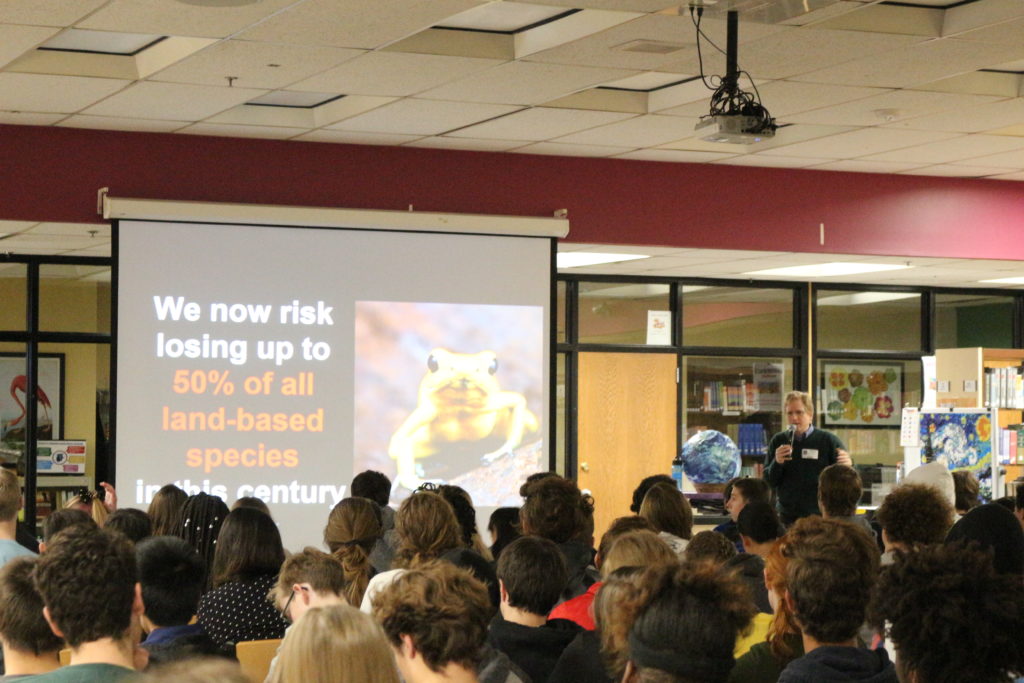 For this talk, I shared how I became a park ranger after graduating from college. I talked about what a typical day is like as an interpretive park ranger and the skills & education needed to obtain this park ranger job. I then explained how I saw climate change threaten the national parks where I worked, which led me to become a climate change organizer. I then asked the high school students if any of them were interested in writing on postcards asking Rep. Ann Wagner to join the Climate Solutions Caucus. Over 160 students, raised their hand and ended up writing on postcards addressed to their member of Congress.

I plan on taking these postcards from the students, plus the completed constituent comment forms from the participants of my St. Louis Community College class, to Washington D.C. in November. I will be attending CCL’s 2018 Congressional Education Day, where we will be lobbying Congressional offices at the Capitol on Tuesday, November 13th. I intend to present these postcards and letters to Rep. Ann Wagner’s staff during a lobby meeting. My hope this can help create political will For Rep. Wagner to eventually join the Climate Solutions Caucus. 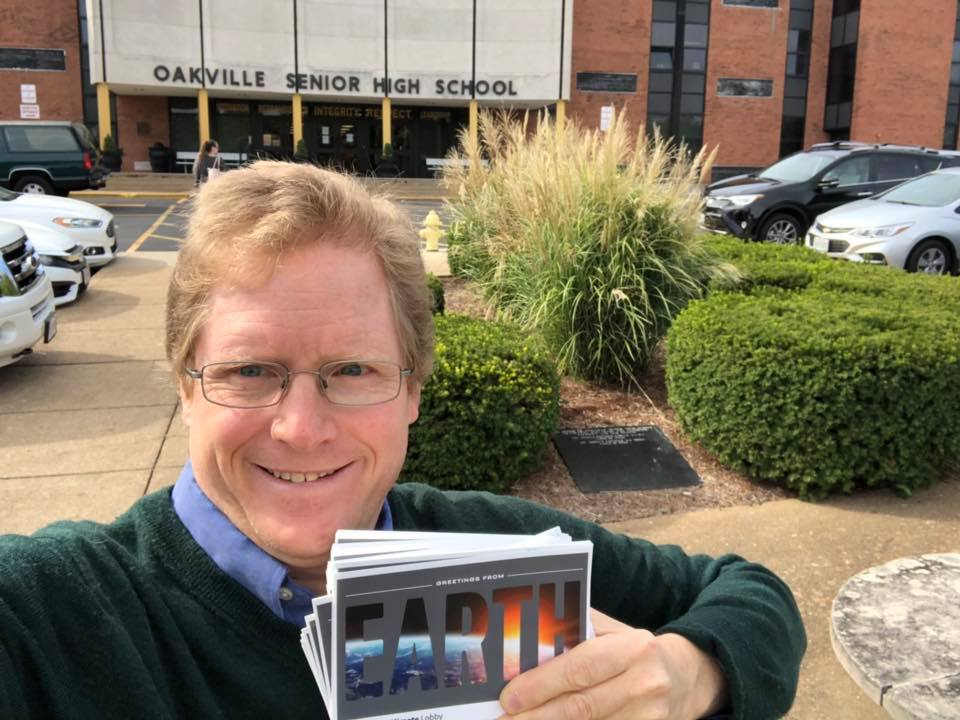 In September, while still planning this trip, a friend of mine who is a climate science professor at St. Louis University (SLU), Dr. Jack Fishman, invited me to speak SLU during my trip. Dr. Fishman and I agreed I would speak at SLU on Wednesday, October 17th. For this group of SLU science major students, my topic was How to speak with someone who disagrees with you about climate change. Two local St. Louis area CCL volunteers came to show their support. They were among the 50 SLU students, faculty members and local community members who attended my talk.

To generate publicity for this tour and my speaking events, I wrote 2 letters to the editor that were published in October in St. Louis neighborhood newspapers, Oakville Call and Webster Kirkwood Times. Independent St. Louis radio station KDHX 88.1 FM did an Earthworms podcast episode with host Jean Ponzi interviewing me that was released in early October. 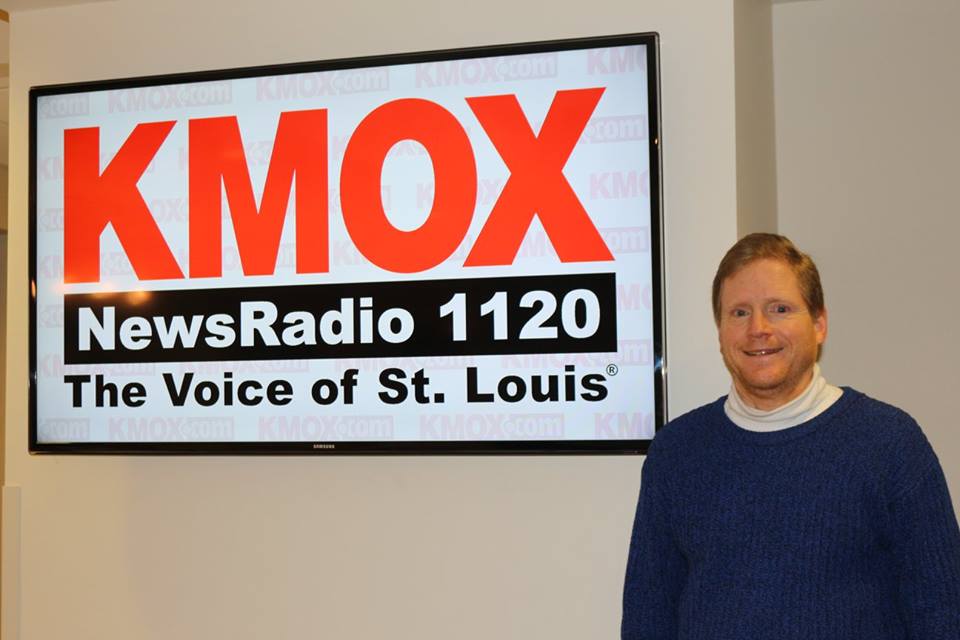 This tour was a dream come true for me to travel across Missouri to promote climate action. I felt like I had received such a quality education from Oakville High School and William Jewell College. Thus, I wanted to repay what I had learned. Even more, I hoped to inspire a new generation of students the way that I was inspired by the teachers, professors, and guest speakers I encountered during high school and college.

Furthermore, I hope my tour it inspires you to travel across your home state to promote climate action and speak at your old high school and college. From the sweet memories of my tour, I believe it can be a very rewarding experience to return to your old high school and college inspire students to act on climate. I encourage you to stretch yourself out of your comfort zone to reduce the threat of climate change by going home. 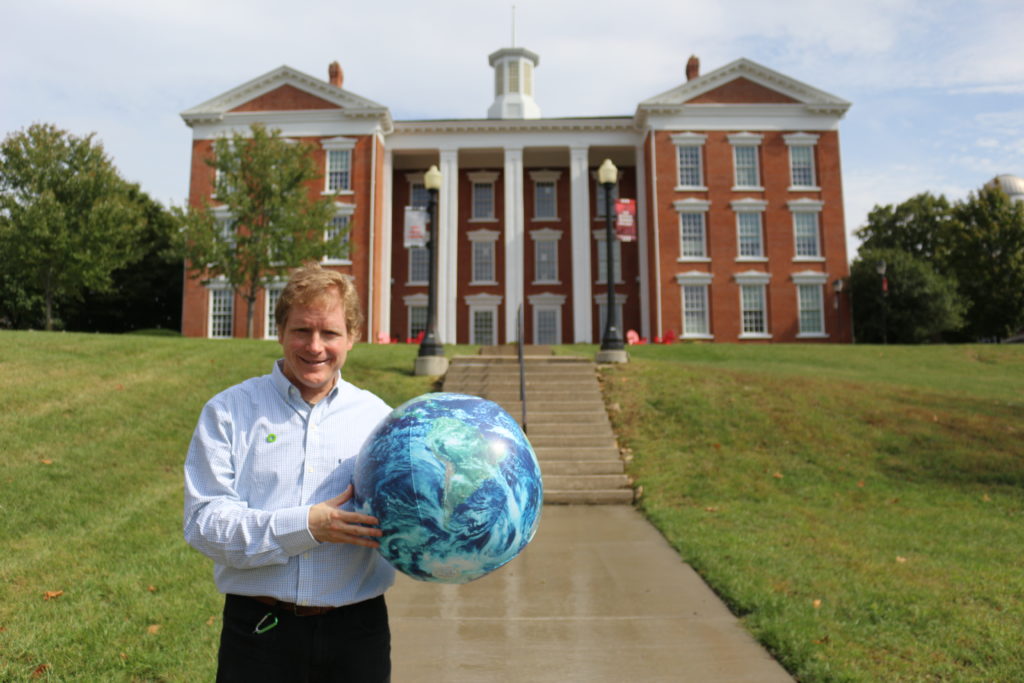