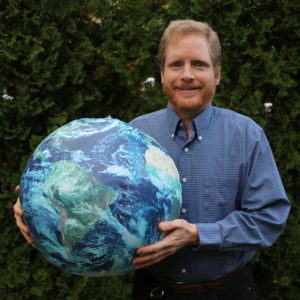 Several months ago, my friend Naomi asked me on social media: “When you have time I would love to see some everyday things we can do to help the earth.”

Naomi posed this question to me after I announced on September 7th on Facebook of my upcoming climate change speaking events across my home state of Missouri October 9-17. I did take the time to answer her question immediately. I even responded to Naomi: “Thank you for posing this question to me. You just helped me write my next blog.”

My October tour across Missouri went amazing. I even blogged about it afterwards. However, I got distracted and busy with life, but now I am going to write out for you here:

My 8 Everyday Actions you can do to help the Earth:

1. Vote. in every single election, even in the most local races. Nathaniel Stinnett, the founder and executive director of the Environmental Voter Project (EVP) gave a very eye opening talk on the June 2018 Citizens’ Climate Lobby monthly call. Nathaniel laid out his case how politicians track likely & committed voters. When we vote, it is public record (how we vote is private). When we consistently vote, elected officials pay more attention to us. Even more, the Environmental Voter Project identified “10.1 million Americans who are already registered to vote and prioritize environmental issues, but…who simply didn’t find the motivation to get to the polls in (the 2016 Presidential) election that was decided by 77,000 votes.”

Bottom line: we must vote in every election. Then, we must educate ourselves about  candidates and the issues when we vote to make voting for the Earth a top priority for politicians. 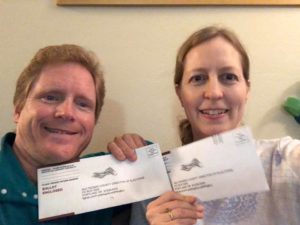 Brian Ettling and his wife Tanya Couture voting by mail in Oregon on October 20, 2018.

2. Regularly contact your members of Congress about climate change, gun control, women’s rights, civil rights, human rights, and issues that you care about. It just takes a few minutes to write a letter, e-mail or call their Washington D.C. office at (202) 224-3121. Since 2015, I have lobbied Congressional offices in D.C. When I meet with staff of GOP members of Congress, they consistently tell me that they do not hear from constituents on climate change. That has to change. 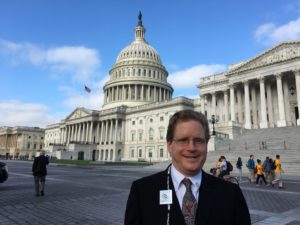 3. Organize If your member of Congress is not listening to you and your friends, organize. President Barak Obama said it best in his farewell address: ‘If you don’t like what your elected official is doing, grab a clipboard.’

Engage the grass tops in your community (the clergy, business leaders, local elected officials, personal friends of the member of Congress and other influencers) to bend the ear of the members of Congress on this issue. Organizing works. Organizing is how Citizens Climate Lobby volunteers got every single GOP member of the bipartisan House Climate Solutions Caucus to join that caucus. This caucus began in February 2016 with just two members, GOP Rep. Carlos Curbelo and Democrat Ted Deutch of Florida. By the time on the November 2018 mid term election, this caucus was at 90 members, 45 GOP and 45 Democrats, exchanging ideas on climate issues. 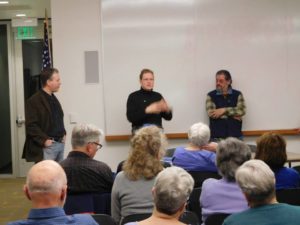 Brian Ettling speaking at the Vancouver WA library on February 15, 2018.

4. Talk about climate change to your friends, family, co-workers and neighbors. Americans are not talking about it in their everyday conversations. In September 2016, the Yale Program on Climate Change Communication published this report, Is There a Climate “Spiral of Silence” in America? According to the report: 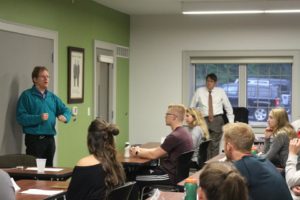 Brian Ettling speaking about climate change to a class of college students at his alma mater William Jewell College, October 9, 2018.

5. Weatherize your home for the winter months and if you use AC in the summer. There is a group in Portland Oregon called the Community Energy Project that will come to your apartment complex, teach you how to weatherize your home or apartment to save money and even give you materials to do so.

6. Install solar. If you own your home or live in a condo where you own your roof, install solar. Solar is affordable and it will help you save money in the long run. It is one of the best investments you can make with an outstanding return. Plus, it increases the value of your home. Who wouldn’t want to buy a home with a very minimal or nearly non-existent electric bill.

7. switch to an electric car, if you can afford it. I briefly worked for Tesla Motors in 2018. I was very impressed with their cars. Yes, they are more expensive to buy up front. However, their range is over 200 miles, with numerous charging stations across the U.S. Think of the pleasure of never having to go to a gas station again and the savings on those cars, such as no longer having to pay for oil changes and other maintenance required on internal combustion engines. 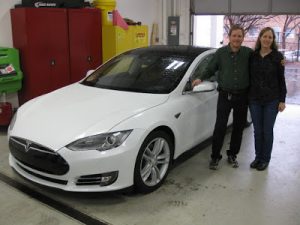 8. Be hopeful. In 2011, University of California Berkeley scientists, Matthew Feinberg and Robb Willer authored this published paper, “Apocalypse Soon? Dire Messages Reduce Belief in Global Warming.”  This paper showed that when people were given dire messages about climate change but were not shown solutions, they were less likely to take action. However, when people were given dire messages but given solutions where they could take action, they were more likely to take action. Thus, it is always so important to stay hopeful and positive in our conversation with others. As I have been saying for nearly 20 years now: 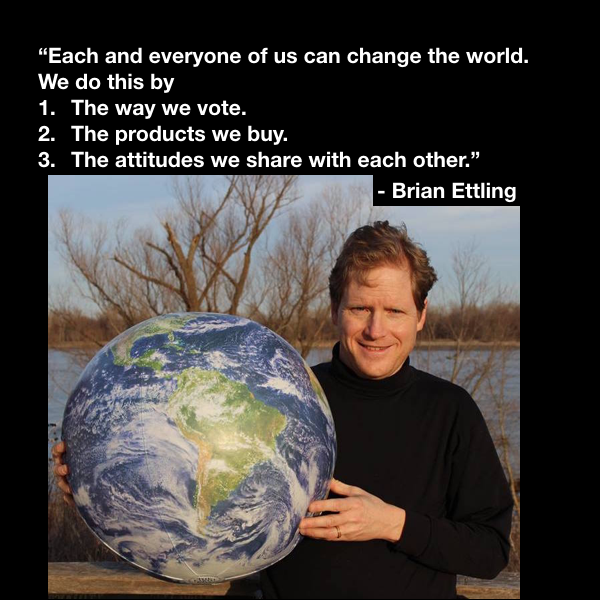 Naomi was not satisfied with my answer.

Her Response: “Out here we need simple through more demanding actions we can take.
Including ways at home or office or at the mall! Things that help think about bringing our green bags to buy produce or is paper or plastic really better? We need people like you who have studied this to show us how we live our commitment to a healthier earth with spending our lives washing out diapers or sorting recycling. As you know there is too much pushing us to waste. How do we make efforts that make a difference but don’t exhaust us?”

“Here are my simple solutions: vote, regularly contact your members of Congress to support a price on carbon, engage your local grasstop leaders to persuade them to contact Congress, regularly engage your friends & family on the subject of climate change and exchange solutions how to act, weatherize your home, invest in an electric car to help usher that vehicle revolution, install solar on your home and if you cannot demand your utility gets its energy from 100% clean sources, and spread messages of hope and solutions.

Economists from across the political spectrum tell us that we need a price on carbon to help us alter our behavior. Products should be priced for their full cost of pollution to society. Yes, Citizens Climate Lobby is showing that it can be done. 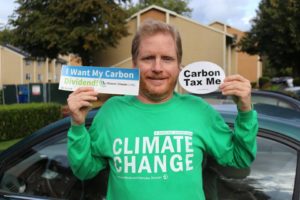 Yes, do bring your own reusable bags to the grocery store. That is great! I have been doing that for over 20 years. Yes, do recycle as much as you can. I have been doing as much recycling as I can since I was a child. Yes, do buy less and use less consumption of products. I try to buy second hand as much as I can.

However, my thoughts are that we must push for systematic change and that will also inspire us to also make individual changes. As Al Gore said over the the past decade, “As important as it is to change your light bulbs, it is even more important to change the laws.”

The cool thing is that when one invests in weatherization, solar, electric vehicles, buying second hand as much as they can, consuming less, etc, you save $money$. Conservatives get that too. When we frame it for them that weatherization, solar, electric vehicles, and consuming less saves them money in the long term, my experience is that they are all ears.

The simpliest way to not exhaust people is to put a price on pollution and give people back monthly dividend checks so they can see the benefits. That is my answer.”

Naomi did not comment anymore about this topic after my last answer to her.
Thus, I hope I was able to answer for her and others: My 8 Everyday Actions you can do to help the Earth right now. 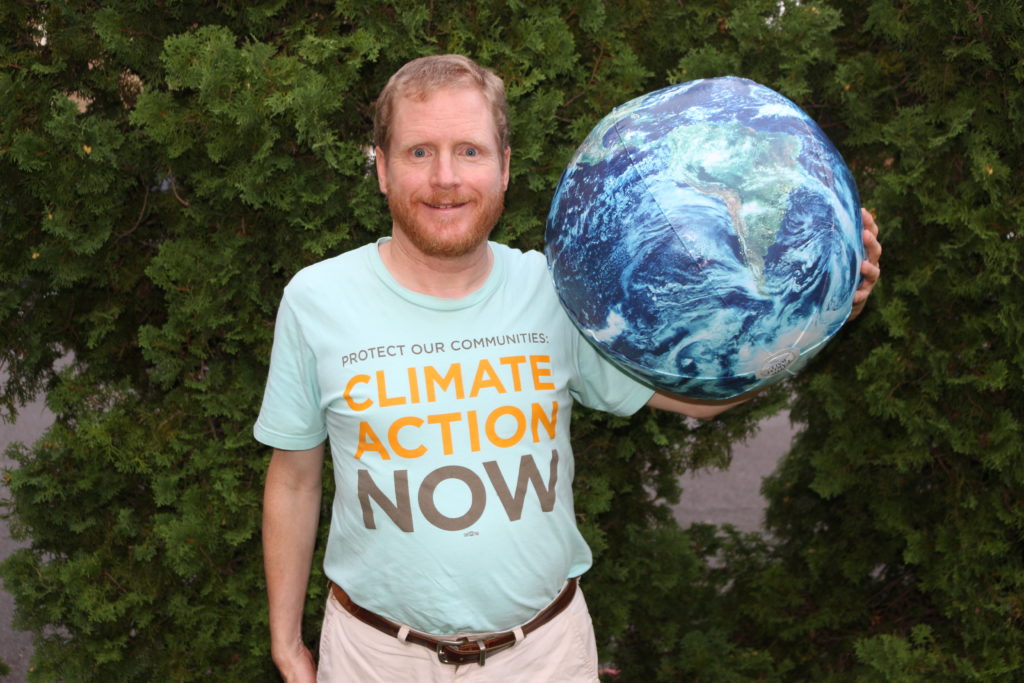