“The most exciting phrase to hear in science, the one that heralds new discoveries, is not ‘Eureka!’ but ‘That’s funny…'” – Isaac Asimov

Looking to be entertained by someone with a mutual geeky love of science? Look no further than Brian Malow, Earth’s Premier Science Comedian (self-proclaimed). He has performed for NSF, AAAS, JPL, NIST, ACS, AGU – and many other acronyms, as well as comedy clubs nationwide.

Brian currently works in science communication for the North Carolina Museum of Natural Sciences in Raleigh, and blogs for Scientific American.

Brian has made science videos for Time Magazine’s website and is a contributor to Neil deGrasse Tyson’s radio show. He gives workshops and presentations to train scientists to become better speakers and that is where I first encountered Brian Malow.

He was a guest speaker for the December 2011 Communicating Your Science Workshop at the AGU (American Geophysical Union) Fall Meeting in San Francisco. His workshop for scientists and science communicators like me was called, Delivering Your Message: Lessons from Stand-up Comedy.

To this day, this was one of the most beneficial workshops I have attended for tips to successfully engage an audience on science, especially climate change. 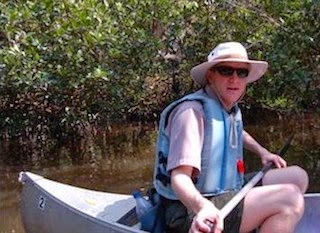 Unsure how to pursue this passion, one day I was brainstorming with my friend, Naomi, in Ashland, Oregon. She was giving me lots of advice. Finally, I said out of honest desperation, “If I could do anything, I would like to be the Climate Change Comedian!”

Naomi just about fell out of her chair laughing. She said, “You go home and grab that website domain.” I immediately did that and a friend helped me build the website, climatechangecomedian.com in March 2010. I have not done much with the website since then, even though I love to blog, create videos, and contribute posts to the website Climatebites.org.

In Spring 2010, I also created my first powerpoint attempt to find that sweet spot of sharing the science and solutions to climate change while incorporating humor. It was called Let’s Have Fun Getting Serious about Resolving Climate Change. 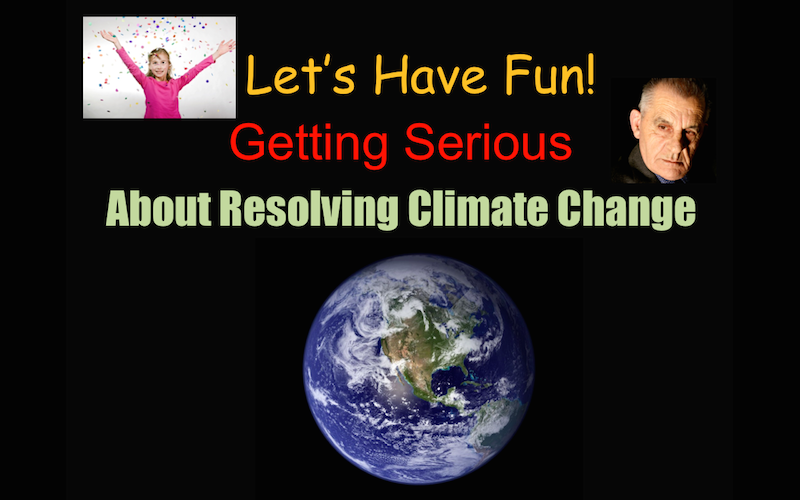 I gave this talk a few times for friends to get comfortable Towards the beginning of my talk, I shared some of my favorite quotes trying to find the sweet spot between humor and serious learning:

– “Jokes of the proper kind, properly told, can do more to enlighten questions of politics, philosophy, and literature than any number of dull arguments.” – science fiction writer Isaac Asimov

– “You can turn painful situations around through laughter. If you can find humor in anything, even poverty, you can survive it.” – comedian Bill Cosby.

(Ok, knowing what we know now about Bill Cosby, I would not use this quote in 2015. However, I really liked this quote in 2010)
– “If I had no sense if humor, I would long ago have committed suicide.” – Mohandas Gandhi.
Nobody ever laughed at that last quote, even though I thought it was very funny. I am a big fan of Gandhi and all he was able to accomplish. This quote shows me that he did not take himself or life too seriously. Nobody in the audience seemed to get that logic though.

Ok, you can tell I need a lot of help with my humor. To this day and in my short videos, my mom and fiancée Tanya tell me that I am not that funny.

Therefore, yes, I was in great need of Brian Malow’s workshop at AGU in December 2011, Delivering Your Message: Lessons from Stand-up Comedy.

To relate his love of science to the audience, Brian Malow starts with the joke, “I used to be an astronomer, but I got stuck working the day shift.”
I still love this joke no matter how many times I have heard Brian tell it (twice in person, his NPR Science Friday appearances, his YouTube videos, etc)
Soon after that opening joke, Brian gave some advice that really jumped out at me. He said,
“An audience is not an amorphous blob. It is a group of individuals. Keep this in mind.”
I never forgot that advice. Whenever I give a talk, whether as a park ranger, teacher, or guest speaker, I always try to get to the event extra early to get to know individuals in the audience. I try to find out where is their hometown, what brought them to the event, and what they hope to get out of my talk.

That information is so valuable to weave into my talk, establish more rapport with the audience and get them on my side for the topic I am presenting.Brian went further to say to know that your audience is human. Therefore, connect with them with human ideas. He encouraged us to put ourselves in our programs. I took this to heart nine months later when I developed my own ranger evening campfire presentation at Crater Lake National Park on YouTube, called the The Good, The Bad, and the Ugly. I put goofy images of myself in my program so my audience could relate more to me and the information I was sharing with them. Such as me below catching my first gigantic kokanee salmon at Crater Lake in 2012. 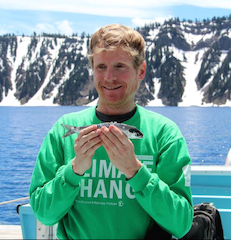 Brian Malow pointed out that every story has a conflict. We need to engage an audience on our topic in a way that answers their question: Why should I care?
He challenged us to use analogies and metaphors to connect with our audience. This was music to my ears because I contribute to a website, Climatebites.org where we collect sound bite metaphors and quotes on climate change.

One of my favorites: confused about weather vs. climate, then check your underwear drawer.

Or, Climate change A political issue? That’s like choosing sides over E = mc2

Brian then advised us that power point “should be supporting special effects, not total reliance.” He challenged us not to use powerpoint at some point. He guaranteed it will fail at some point.

Gulp. I still overly rely on powerpoint. I struggle with memorization and I love some of the images I use for laughs. Such as Positive Proof of Global Warming slide with the change of underwear fashions over the years from the long bloomers our great grandparents wore to the dental floss thongs some teenagers and young adults wear today. 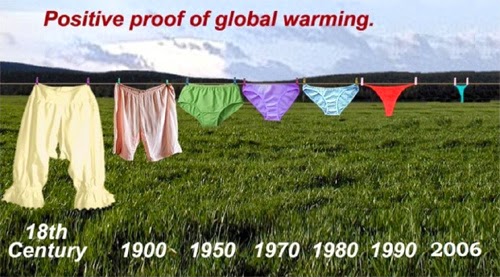 Brian then taught us that our visuals should be visual. They should tell a story and even enhance your story. They should not include a lot of words, if any at all.

He then showed his funny and educational powerpoint about Louis Pasteur which is on YouTube called How Wine Saved the World. To illustrate how Louis Pasteur was a “super-chemist,” the slide shows a Photoshopped image of Pasteur’s head on Superman’s body.

Even more, Brian’s powerpoint shared a great scientific story how Louis Pasteur proved that life can only come from life. Pasteur crushed the previous accepted doctrine of spontaneous generation. He performed experiments that showed that without contamination, microorganisms could not develop.

He ended that story with this amazing Louis Pasteur quote: “Never underestimate the infinitely great power of the infinitely small.”
Brian encouraged us to engage our audience to ask questions. One question he posed to us:
“Does anyone here have a fear of public speaking? Can you please come up here and tell us about it?”
With two very sticky quotes, he stated we should try to be very clear and precise with our words. Such as:
“The difference between a partial eclipse and a total eclipse is the difference between a notion of water and an ocean of water.” – Isaac Asimov
“The difference between the right word and the almost right word is the difference between lightning and a lightning bug.”  – Mark Twain
With Brian’s marvelous use of humor and analogies, I asked him during the talk if he had an helpful metaphors or humorous analogies for climate change.

Brian had a treasure load of these that he very generously shared and I turn then incorporated into some of my writings:- We are treating the small livable part of spaceship earth, our air supply, as an unregulated SEWER to dump our vehicle and industrial wastes. Currently, carbon dioxide emissions are roughly 36.7 billion, with a B, metric tons a year. Throwing this much carbon dioxide into our atmosphere is really no different than me lighting up a cigarette in this room. Even more, imagine that you were swimming in a beautiful Olympic size swimming pool. Then you saw someone peeing into the pool. Then you saw another person peeing into the pool. Then another. And another. At way point would you yell at the top of your lungs, “STOP PEEING IN MY POOL!” 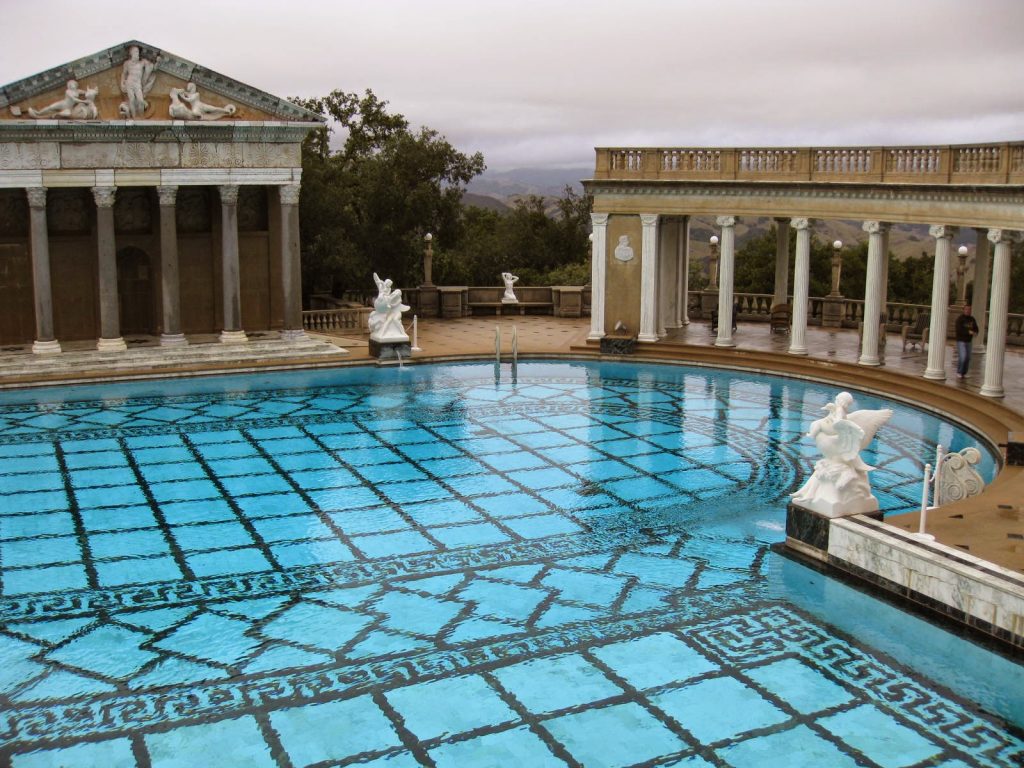 – Climate change is as if the check engine light light has turned on inside our car and we have decided to put our thumb over it on the dashboard.

– Brian thinks it is odd that people trust experts for everything, except for evolution and climate change. People think they know more than these experts.

But for some reason when it comes to evolution or climate change, you’re going to trust some politician and not the experts? It’s so absurd. What if we greeted plumbers with the same skepticism? “Oh, yeah, right, right. You’re just gonna snake that little thing down there and it’s gonna clear up the problem? Sure. And I’m supposed to believe that?”

– Brian found it odd that in nature all the other creatures are adapting to climate change “except for us brainiacs.”
– Brian pleaded with us to use plain words like “air supply,” not atmosphere, when we are talking with the general public. 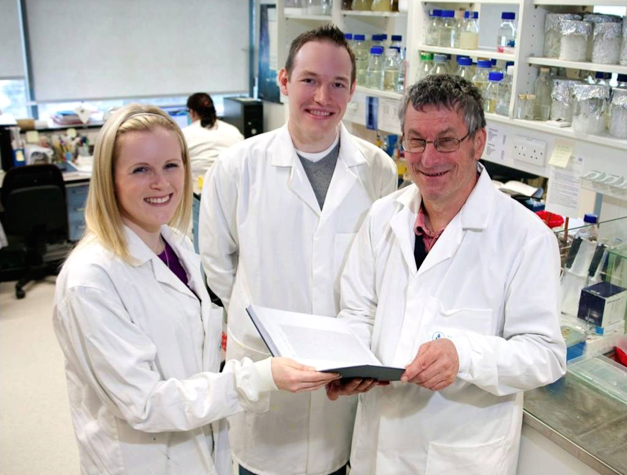 What really shines through Brian’s comedy routines, radio interviews, videos, and scientific workshops is his love of science. He told us that science is a process. Science is the pursuit to satisfy our curiosity.

He then ended with his inspiring quote:
“Scientists have maintained their child-like wonder of the world. The only other profession I am aware of like this is clowns, and I think they are a lot less scary than clowns.”
If Brian Malow scheduled to perform in your city, I highly suggest you drop everything you are doing and go see him. Or at the very least, do check out his YouTube videos.

Thank you Brian Malow for your humor and inspiring me to more effectively use humor when I am giving talks on climate change. I blogged about my own success over a year ago: Using Humor Effectively to Communicate Climate Change.You have been a big influence on me.