Two years ago, October 5, 2011, I had a lunch meeting that changed my life.  It was at the Indian Ocean, a small Indian Restaurant in northwestern Washington DC.  At the end of the meeting, my new friend and I both uttered these words: 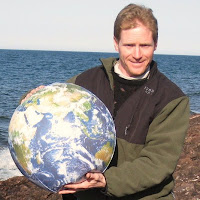 I CANNOT THINK OF ANY BIGGER PRIORITY FOR MY LIFE THAN TO DO SOMETHING ABOUT CLIMATE CHANGE.“
At the time, I was in DC visiting a friend and sightseeing after I just attended the National Park Service & NASA Earth-to-Sky Communicating Climate Change conference in Shepardstown, West Virginia.
I left the NASA conference very jazzed about wanting to communicate more about climate change, but I was unsure what to do for the winter or my life.  I knew I was headed back to St. Louis, but I did not know where I would be working or what I do be doing.
For five years now, I have been on a journey to be a climate change communicator.  August 24, 2011, I had put a message on Facebook about wanting to go to grad school to study climate change communications.  I was looking for advice for studying for the GRE.
Two days later, my friend, Sundae Horn, sent me this message:
“Brian, I saw your post about going back to school, and although I don’t have any advice about the GRE, I want to pass on the website of our friend. His name is Tom Smerling — somehow I think we told you about him, or vice versa, but anyway, he’s a great guy and loves to talk climate change.”
I worked Sundae and her husband, Rob, in the Everglades for many years. They are very kind people.  If Sundae was recommending Tom, then he must be a great guy also.  I was very intrigued also when she mentioned he loves to talk about climate change.
I immediately e-mailed Tom and we exchanged messages, promising to chat more at some point.  I looked at his website also, Climatebites.org.  The style and message of the website really amazed me.  The focus of the website is to provide metaphors, soundbites, quotes, humor, and stories for people who want to talk about climate change and wants their message to stick.  I immediately recommended the website to friends deeply interested in climate change.
I noticed Tom lived in the DC area.  I knew I would be visiting there in October.  When I arrived in DC, we exchanged e-mails and he suggested meeting for lunch at the Indian Ocean.
Upon meeting Tom, I immediately felt like I had made a friend for life.  It felt like I had met a kindred spirit.  We exchanged so many ideas about climate change.  We both agreed that humor is vital when communicating about climate change.  I showed him my website, Climatechangecomedian.com and my climate change evening program.  He showed me the humor section of Climatebites, which has a video link of his favorite stand-up economist, Yoram Bauman and comedian David Crowe’s hilarious Gasoholics Anonymous.
He challenged me on the spot to contribute writings to Climatebites.  Gulp.  I had very limited experience with writing.  However, it did seem like it could be fun.
I will never forget the end of the meeting, we both said, “I CANNOT THINK OF ANY BIGGER PRIORITY FOR MY LIFE THAN TO DO SOMETHING ABOUT CLIMATE CHANGE.”
It took me a couple weeks, but I did post my first bite on Climatebites on October 14, 2011, Would you argue with your doctor over a heart condition?  I have steadily written bites ever since then.  I am now closing in on 90 bites.  Some of my Climatebites have now been re-posted on other websites, such as boomerwarrior.com, climatemama.com, and elephantjournal.com.
Tom encouraged me to write my own blog again.  I created my blog on February 1, 2011, and I quickly wrote a second entry the next day.  However, my blog sat idle for nine months 10 months before Tom challenged me to write my own blog again.  My own blog led me to have an article published in the Yale Forum on Climate Change and the Media on April 26, 2012.  One of my blog posts was also re-posted on Harriet Shugarman’s Climatemama.com website.  This posting you are currently reading is now my 32nd blog entry. 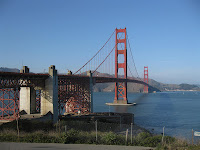 Tom challenged me to attend the American Geophysical Union (AGU) Conference in San Francisco, California last December.  He enticed me to attend by promising I would meet so many of the top climate scientists and communicators.  Man, his sales pitch turned out to be an understatement.  At AGU, I got to meet climatesight.org author Kate Alexander, Scott Mandia, Michael Mann, Richard Alley, James Hansen, Naomi Oreskes, Richard Somerville, Ben Santer, Ed Maibach, Susan Hassol, John Cook, Peter Sinclair, Gavin Schmidt, Science comedian Brian Malow, and so many others.
While attending AGU, I was invited to attend a Union of Concerned Scientists cocktail party where I met Dr. +Peter Joseph.  I mentioned my interest in climate change to him and we struck up a good friendship.  Peter lobbied hard on my behalf with Al Gore’s organization, The Climate Reality Project, so I could attend the Climate Reality Training in San Francisco in August, 2012.  As a trained Climate Reality presenter, I presented along with local St. Louis Climate Reality Presenters, Larry Lazar and Lucas Sabalka, at the Ethical Society of St. Louis on December 6, 2012.
I am not sure what adventure 2013 has in store for me.  I know I will be speaking at the Piasa Palisades Sierra Club meeting in Alton, Illinois on February 11, 2013 about climate change.  I will be giving a Toastmasters speech on climate change on Wednesday, January 30th.  I will be teaching a continuing adult education class on Climate Change Communications for St. Louis Community College on February 23, 2013.  I am also now deeply involved with organizing for the Citizens Climate Lobby (CCL) with the St. Louis group.  I also started a CCL group in southern Oregon while I was working at Crater Lake National Park last summer. 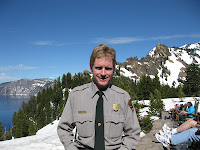 I also hope to return to Crater Lake, Oregon for the summer.  I work there as a naturalist ranger narrating the boat tours, trolley tours, guided hikes, geology talks, etc.  My evening campfire program for the past two summers has been on the impact of climate change on Crater Lake.
Beyond that, it is a mystery how I will be following my passion with climate change in 2013 and upcoming years.  However, I will still never forget all the encouragement and advice from Tom Smerling.
Our mutual mantra from when we ended our lunch meeting at the Indian Ocean Restaurant in Washington, DC on October 5, 2011 is always bouncing around in my head. 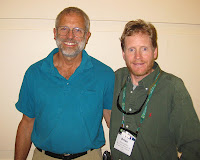 I CANNOT THINK OF ANY BIGGER PRIORITY FOR MY LIFE THAN TO DO SOMETHING ABOUT CLIMATE CHANGE.”
Thank you Tom Smerling!
Even more, Thank you Sundae Horn for introducing me to Tom Smerling.