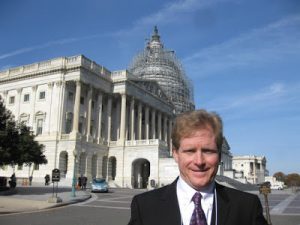 Warning: organizing, lobbying and advocating for climate change can actually lead to a personal injury. I know this firsthand. However, the pain, therapy, inconvenience and recovery are well worth the sacrifice.

November 15-18, 2015, I traveled to Washington D.C. to attend Citizens’ Climate Lobby‘s (CCL) November Conference and Lobby Day. It was an incredible trip that I documented in the blog,
8 Lessons I learned lobbying Congress on climate change November 17 & 18, 2015.

The trip was way more productive and fun that I had even hoped it would be. I had meetings with 5 Congressional Offices. Plus, I attended a Missouri Mornings Coffee meeting where I got to meet and get my picture with Missouri U.S. Senator Roy Blunt. I really do love lobbying, preparing and doing my homework to get ready for the meetings, learning from the staff what are the interests of that member of Congress and trying to find common ground, etc.

Thus, I was feeling very elated with I boarded the plane in Washington D.C. to head back to my home town of St. Louis, MO. I could not wait to tell my wife, in-laws and family who how this trip went.

When the plane landed in St. Louis, I headed to the baggage claim to retrieve my suit garment bag. I purchased for this garment bag for this trip with some of the wedding money that my wife and I received from our wedding just two weeks before. I overpacked this bag because of my disorganization that I blogged about previously. As soon as I picked up my bag from the baggage claim, my mother-in-law called on my cell phone to tell me she was waiting for me in the passenger pick up area. She had followed the progress of my flight very closely and had timed it perfectly to pick me up. I did not want to keep her waiting, so I threw the heavy bag over my shoulder using the should strap and I ran to meet her.

Uh Oh! I just got a painful injury while lobbying for climate action!

When I got home, I noticed it was pain in my shoulder as I took off my sweater. Even more, I noticed I had a hard time getting my right hand to lift above the shoulder. Like a lot of aches and pains in life, I thought it would go away in a few days. It did not. The pain got worse as the winter progressed. Because something was wrong with my shoulder, a couple of times I sneezed hard and the triggered pain in my right shoulder brought me to my knees like I had been shot with a firearm. The episodes get getting worse. Tanya and I went hiking New Year’s Day 2016. I slipped on the mud on a the trail. I landed near the injury on my right shoulder. The pain was so bad, plus my arm and shoulder were not functioning properly, that I flailed around on the ground for awhile unable to get up. I must have looked like a fish out of water flopping around on the ground. We were newly weds at the time, only married two months. Tanya must have been wondering: ‘What did I get into with this marriage?’

By January, I knew I had to go see a doctor so I went in for a physical fitness and I explained my ailment to him. He then prescribed for me for an appointment to see a physical therapist. Several days later, I went to see the physical therapist named Mary. She ran some exercise tests on me. Mary determined that I had a frozen shoulder with tendonitis. The muscles in my shoulder and upper arm were sprained and other muscles compensated. When I was trying to use the strained muscles, they were weak from atrophy. Hence, the pain when I did try to use them.

My road to recovery from this injury

Mary prescribed a series of physical exercises to do at home and we agreed to make appointments once to twice a week to do physical exercises in her office to track my progress. I was very relieved. She did not think I had a torn rotator cuff that did not need to be corrected with surgery. My injury could have been a whole lot worse. I dodge a bullet. Whew!

I went home and immediately starting doing all of the prescribed exercises and then some. I was working out of the first in my life and loving it. The fun part was that I could listen to my favorite podcasts, such as Climate One, Citizens’ Climate Lobby, TED Talks, Fresh Air, etc. and be finished with my 30 exercises twice a day in no time. Plus, I had to ice down my shoulder twice a day after my exercises, which gave me more time to listen to podcasts and educate my mind. 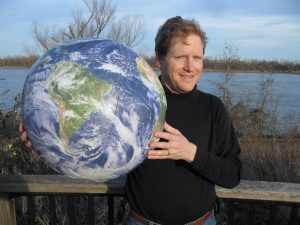 As I started waking up, engaging, and strengthening my right shoulder and upper arm muscles, it did hurt for a good month. I did not mind at all though because I kept thinking of the cliché: “No pain no gain.” Mary marveled at my progress as I was completing the exercises. She would add more exercises to keep the momentum of my progress going. By the middle of April, Mary thought I had fully recovered and she saw no need to continue our physical therapy appointments. My appointments and therapy ended just in time for my travels back to Oregon to work at Crater Lake National Park as a ranger for the summer.

It is now exactly one year after I completed my last physical therapy appointment. my right arm and should feel normal, just like before my therapy. I can comfortably raise my right arm above my head and easily put on clothing, which was a painful undertaking a year ago last January.

I am still very relieved that I did not have to go through surgery and the injury was not worse than it was. The big picture is that I have no regrets. I got injured during a lobbying trip in Washington D.C. trying to urge my members of Congress to take action on climate change. Since this injury happened while I was pursuing my deepest passion, the injury and recovering from it became a point of pride for me.

“I got injured while lobbying to reduce climate change!” I bragged to a few friends.

Even more, I got to educate my mind even deeper on the science, problem and solution to climate change listening to podcasts while doing my physical exercises to recover. I loved listening and watching climate change related podcasts and videos. Ironically, the physical therapy became an excuse I look forward to twice a day to educate my mind. I particularly loved watching and listening to this 2016 Al Gore TED talk over and over again: The case for optimism on climate change. Al Gore’s optimism on climate inspired my optimism for climate action and overcoming my injury.

As Friedrich Nietzsche observed: “That which does not kill us makes us stronger.”

During the past year, I attended two Climate Reality Leader Trainings, Houston TX and Denver CO, as a mentor and guest speaker. My wife and I moved to Portland Oregon in February when she accepted a new job. At the end of March 2017, I traveled back to Missouri for one week to lobby Congressional offices of Missouri U.S. Senators Roy Blunt and Claire McCaskill and meet with the District Director of U.S. Representative Ann Wagner (MO-02). Even more, I gave a climate talk in Jefferson City, Missouri to over 100 people and a talk in Kirksville MO to over 60 people. Those events were reported Jefferson City News Tribune and the Kirksville Daily Express. Plus, video of my Jeff City talk was posted on YouTube:

Yes, it is safe to say that I fully recovered from that frozen shoulder and tendonitis. Although entirely my fault, I did suffer an injury as a I lobbied to reduce the threat of climate change. I continue to be smarter to avoid injury when I travel. However, I have no regrets about making that sacrifice. It was well worth it.

How about you? What sacrifices are you willing to make to reduce the threat of climate change?

I can tell you that the rewards to making a difference by lobbying, organizing, meeting with climate advocate friends, being involved with groups like Citizens’ Climate Lobby and Climate Reality Project are well worth any sacrifices.

Albert Einstein said, ““We can not solve our problems with the same level of thinking that created them.”

We must take things to a deeper level to reduce the threat of climate change.

Winston Churchill stated, ““Sometimes doing your best is not good enough. Sometimes you must do what is required.”

I don’t want you to get injured. However, I do encourage you though to do all you can. Yes, break out of your comfort zone if you must, to take action reduce the threat of climate change. 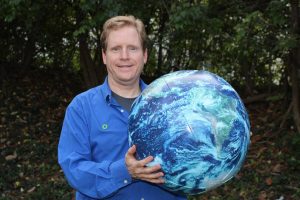