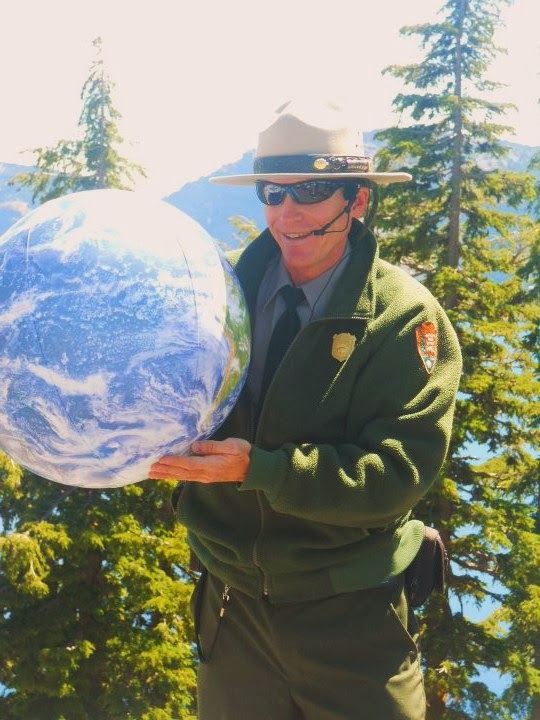 Two years ago, The Yale Forum for Climate Change and the Media published my firsthand account of Communicating Climate change in a National Park.

In this report, I offered five techniques have worked for me in presenting a climate change-themed presentation in a national park:
1. BE LIKABLE.
2. BE ENTHUSIASTIC.
3. BE CREDIBLE.
4. USE HUMOR.
5. BE HOPEFUL.

“Find some way to naturally incorporate humor into your presentation. As science fiction writer Isaac Asimov once remarked, “Jokes of the proper kind, properly told, can do more to enlighten questions of politics, philosophy, and literature than any number of dull arguments.” If you can find a natural humorous way to share funny stories, images, or analogies, your audience will more likely stick with you on what they perceive is a heavy subject like climate change.” 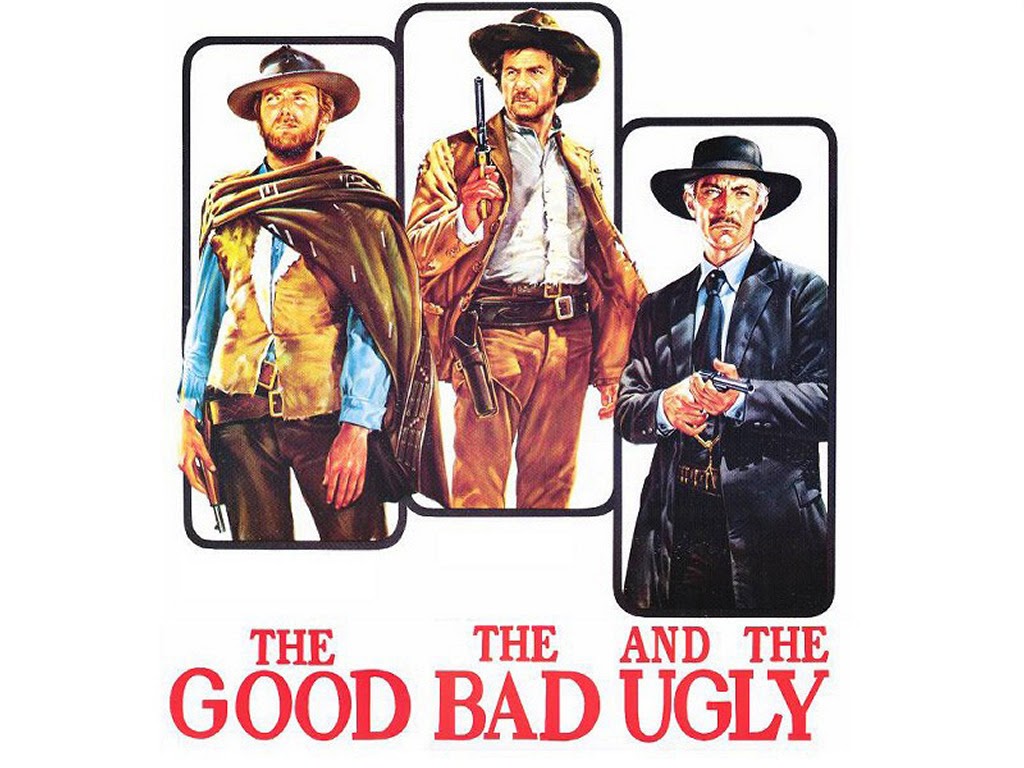 It is one thing to write this, however, this is science.  Thus, I must show that I use humor effectively during ranger evening program.  Thus, I had friends video tape my ranger talk in front a live group of park visitors on September 22, 2012.  I then posted this ranger talk, The Good, the Bad, and the Ugly, on YouTube for the rest of the world to enjoy, laugh, learn, and hopefully be inspired to take action on climate change.

Receiving Praise from a total stranger

Amazing, November 17, 2013, I received a Facebook message from a total stranger, Eric Knackmuhs, an Associate Instructor and Ph.D. Student at Indiana University.  He wrote:

Hi Brian,
I wanted to reach out to you because I have read about your success interpreting climate change at Crater Lake. I’ve been an interpreter for about 10 years and now am back in grad school. I gave a presentation at the NAI National Workshop in Reno last week about using in humor in interpretive programs and I show some clips from your evening program. Just wanted you to know I have been singing your praises. Keep up the good work! I hope you are well. Thanks for the inspiration.
Eric

This e-mail blew me away that someone I never met or had seen one of my climate change talks in person was “singing my praises.”  I had to immediately write back to him to see exactly what am I doing right.  Most of us are our own toughest critics, especially me, I certainly need to know where my strengths are, so I will keep doing that successfully.

A seminar on sharing my funny techniques with other rangers

Eric and I finally got to chat by phone on January 10th.  This is the story he shared with me about how I am using humor effectively to communicate climate change.

In 2013, Eric wanted to give a presentation to other rangers, Using Humor to Introduce Controversial Topics, at the National Association of Interpreters Annual Convention in Reno, Nevada in November, 2013.

Surprisingly, Eric had to defend humor as an appropriate interpretive technique.  Eric told me, many rangers do not like using humor.  They feel like the jokes can fail and put them in an uncomfortable position with their audience.  Eric’s response: ‘Asking your audience questions is also an interpretive technique.  Asking questions can fail also, so that means you should never ask your audience questions?’

When Eric started researching humor, he stumbled across my Yale article and my YouTube video.  In the Yale article, my five techniques that I listed above struck a very positive nerve with him.

In my video, he could hear the audience laughing heartily at some of my jokes.  In Eric’s words it shows that ‘just because an audience is laughing does not mean it is not a serious topic.’ 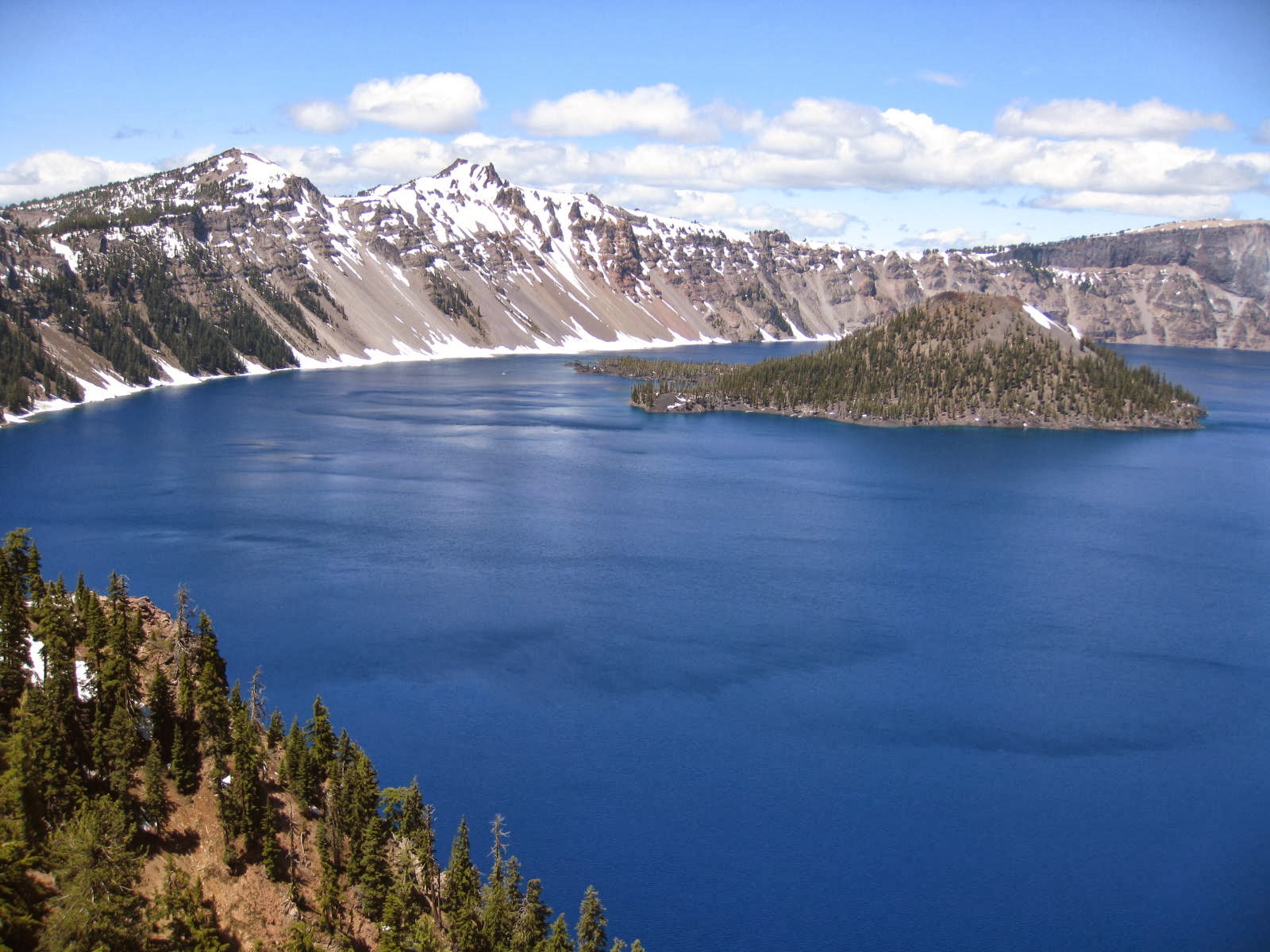 Yes, in my evening program I give sobering and unpleasant information that climate change is impacting the pristine Crater Lake, one of the purest bodies of water in the world.  I show that pikas, small mammals closely related to rabbits, are losing their mountainous range and warming temperatures is a stress for them.  I show that mountain pine beetles, surviving warmer winters in greater numbers, are devastating our white bark pine trees.  Finally, I show that reduced snowpack at Crater Lake and the surrounding Cascade mountains is a huge concerned for the water supply for Oregon cities downstream from the park.  At the same time, I am using humor throughout this talk to make the audience feel more comfortable hearing very uncomfortable information.

As far as using humor, Eric showed the beginning of my talk where I introduced myself with a picture when I first started working at Crater Lake in 1992.

I always joke to the audience with this picture, “I have not changed a bit.  Have I?”  I then show them a recent picture of me and add, “Actually, I think I have gotten better looking over the years.”

People can always relate the universal humor of vanity, over confidence, self deprecation, so these jokes have always worked for me.

Then, I show the title of my talk, The Good, the Bad, and the Ugly.  I have an image of an original movie poster with Clint Eastwood and I even play part of the theme song.  It always seems like there are audience members whistling along to the music.  I am excited and having fun playing the music and showing the movie image, so it always seems like the audience is ready to have fun with me.  With this interaction, I basically set the tone that this is not a serious lecture.  My talk is more like a Hollywood popcorn movie or a bad 1960s ‘Spaghetti Western’ that laugh along while watching.

I then go into my serious theme where I tell the audience, “My talk tonight is about the Good, the Bad, and the Ugly.  I am going to talk about how changes with local temperature, pikas, whitebark park pines, and snowpack, may be an indication global climate change is impacting Crater Lake.”

How is my humor on climate change effective?

This is where Eric then shut off the video to ask the audience what was effective about my introduction.  The response from the audience was:

1. My humor ‘softens the blow’ of the serious subject.

2. It endears myself to the audience and does make me more likable.

3. It introduces a theme in a more accessible way. 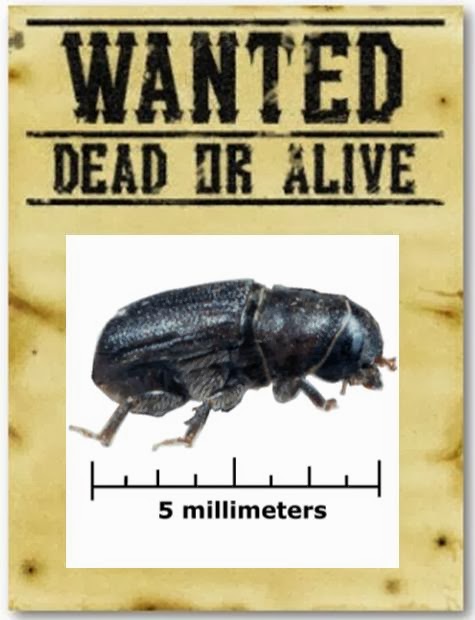 In a second clip that Eric shows, I compare the Mountain Pine Beetles to the bad guys in the movie The Good, the Bad, and the Ugly.  Just like if they were at a sporting event, I encourage my audience to boo and hiss at an image of the beetle.  I even have the image of the beetle in the middle of an old fashion western Wanted Dead or Alive poster.  The audience loves this opportunity to participate in my program and the universal feeling of rooting against a bad guy in a story.

Later on in another clip shows, I compare the mountain pine beetle to the very cheesy 1977 disaster movie, The Monster of Crater Lake, about a large dinosaur that attacks a lovely lakeside community.  I joke how awful the movie is, how my co-workers enjoy watching  it even

though I think it is so bad, I beg them not to order the DVD and watch it themselves, etc.  The audience then roars with laughter at my strong dislike of this bad movie.

Eric feels like that use of humor connect with the audience for many reasons.  First, it is very memorable. Second, it is a very effective metaphor how the mountain pine beetles are attacking Crater Lake’s white bark pine trees like monsters.  Eric thinks they will remember this if they go out hiking the next day and see a mountain pine beetle.  They may even say, “Hey, there is one of those monsters!” and recall the information from my evening program.

Eric then told me,
“When people laugh they are more likely to remember and share that experience.  Laughter is also a social experience.  It forms a strong emotional connection.”

The Importance of teaching humor as an interpretive tool

Eric had given this presentation at least twice.  The first time was for the Regional NAI conference in Oakland, CA last April for about 25 people.  The second time was in Reno last November for the NAI National Conference for about 60 people.

In some ways, he felt like his presentations were like “preaching to the choir” for rangers who already successfully use humor in their talks.  Like anything else, people who hate this topic tend not to come.  On the other hand, Eric still feels like humor is an underutilized technique.  He thinks people make the mistake of separating arts and entertainment from science.

In my experience using humor to explain climate change, Eric is totally correct.  People are more open to learn science when they are being entertained and they are on the edge of their seat anticipating humor.  Both of us feel using humor is vital in communicating about climate change.

Eric believes, “People don’t come to ranger talks just to learn.  They come for a fun social experience.”
Ultimately, Eric feels like my climate change ranger talk at Crater Lake is effective, especially with my use of humor, because:

1. It is a local example of climate change. 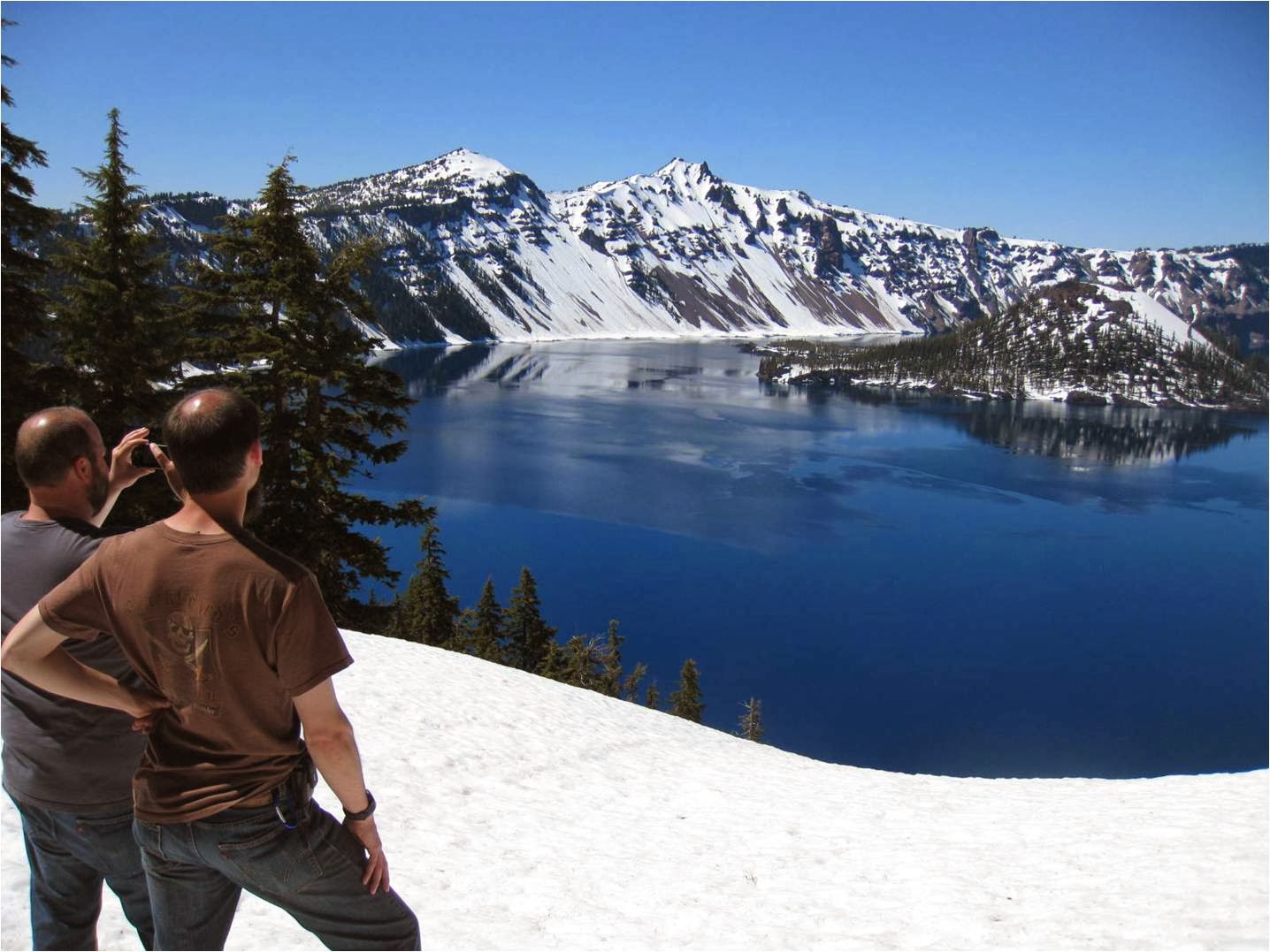 Studies have shown that polar bears have not been an effective image for inspiring people to take action on climate change.   They live too far away in a remote, cold place that they will probably never visit.
The dramatic scenery at Crater Lake creates a sense of wonder and need for protection for the visitors.
They are visiting this national park, so it becomes the local environment to them.

2. It is tangible.
They are experiencing Crater Lake with their senses before and after my program.  Many hike down to touch the water of the lake during their visit.  They see the huge forest of pine trees.

3. It is immediate experience for the visitors.

Hopefully, I gave the audience something they will never forget by attending my talk.  Whenever I give a climate change talk as a ranger or private citizen, my aim is always to educate, entertain, and inspire my audience.  I call it ‘The 3 E’ of successful presentations, even if, I know, one of them does not start with an E.

My wish is that by doing all this some members of audience will be motivated to take action to reduce the threat of climate change for my nieces and nephews.

Thank you Eric Knackmuhs!  You just showed me that I am effectively educating people about climate change and I am inspiring my audience with my use of use of humor.

One thought on “Using Humor Effectively to Communicate Climate Change”