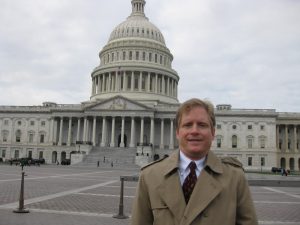 In my four years of climate lobbying, a recent compliment by a conservative Republican who resists taking action on climate change really astounded me.

On March 28, 2017, I met with Miram Stonebraker, District Director for U.S. Representative Ann Wagner (MO-02), and Jordan Fears, Field Representative for Rep. Wagner. Along with three other constituents that I invited, our meeting took place at Ann Wagner’s District Office in Ballwin, MO. The meeting seemed very productive for me to learn how this Congressional Office feels about climate change, clean energy, and Rep. Wagner’s priorities in Congress.

I met with Wagner’s office as a volunteer liaison for Citizens’ Climate Lobby (CCL), a nationwide grassroots advocacy organization focused on on national policies to address climate change. Specifically, CCL wants to generate the political will necessary for members of Congress to pass their Carbon Fee and Dividend proposal. The goal of CCL meetings with Congressional offices is to find common ground on energy, economic and environmental issues so we can work together.

CCL volunteers strive to meet with Congressional staff and members of Congress showing respect, gratitude and appreciation to establish a positive working relationship. Since I was leading the meeting, I made sure we keep the interaction with Rep. Wagner’s staff positive, friendly, and open to hear their perspective. As the meeting progressed, I was very happy with the good rapport between all of us. 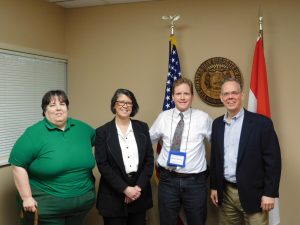 Towards the end of the meeting, Miriam Stonebraker said something unexpected to me that I will never forget. She looked right at me and commented,

“By the way I am really impressed with (Citizens’ Climate Lobby’s) website, I went on there it is very clearly laid out. It is very easy to follow. It shows that you know how to get things down. You have clear goals and you reach them. I am very impressed because lobbying is not easy. Is it Brian?”

The comment left me feeling speechless. Miriam strongly indicated during the meeting that Rep. Wagner is NOT interested in supporting any climate action in Congress. Yet, it still felt like Miriam admired my tenacity with climate lobbying and she was cheering me on.

After a moment of trying to process her admiration for my climate efforts, I smiled back and quickly responded, “‘No, lobbying is not easy, but is it so rewarding.”

It felt in that moment and afterwards that she understands how hard it is to lobby. It can be just down right totally frustrating at times. 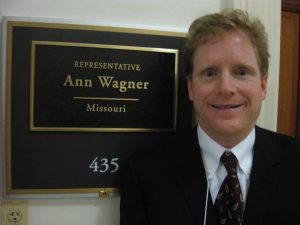 The discouraging part of lobbying

First, it gets engrained into us as Americans that “you can’t fight city hall.” The media, society, family and friends tell us that ‘all politicians are corrupt.’ There are stories on the news of big donors, contributors, special interests, and professional lobbyists controlling elected officials. Thus, it can make one think: ‘Why bother?’ Becoming a citizen volunteer lobbyist can seem daunting and futile.

Then, if one decides to get involved, it can take multiple e-mails and phone calls to a Congressional Office to try to schedule an appointment to meet with staff and/or the member of Congress. If you are able to get a meeting scheduled, it can be hard to get friends to join you in the meeting since so many people disdain politics, think it is a waste of time, or they are just not interested.

If you do meet with the staff and/or the member of Congress, you quickly learn that they may seem skeptical to take action on your cause, such as climate change. Thus, you have to build up the political will in their district to inspire them to act. This means writing and submitting letters to the editor and opinion editorials for the newspapers that can often be rejected. About 50% of my guest opinions that I submit to newspapers are rejected as the newspaper managing editors decide to publish other submissions.

To create the political will for elected leaders to act on issues like climate change, the member of Congress needed to hear from constituents and important leaders in their district that acting on an issue like climate change is vital. Thus, you have to encourage your friends, family, neighbors, and co-workers to write letters, e-mails, and call to your member of Congress for climate action. Then, you run into the same problem I mentioned above: many people disdain politics, think it is a waste of time, or they are just not interested.

On top of that, I had people in the climate movement who I thought were friends and potential allies decide to criticize me instead working with me to lobby members of Congress. In my previous blog, it has been very discouraging for me with all of the people over the years who flatly turned me down when I asked for them their help to mentor me to be a more effective climate organizer and advocate. This past week, I chatted on Skype with one of the top advocacy organizers in the U.S. I was so excited to receive his advice. He was generous with his time with me. Yet, his body language and tone of voice conveyed that he was annoyed meeting with me. It felt like I was a nuisance and wasting his time, when I am so hungry and eager to be more effective as a climate organizer and lobbyist.

To be honest, I have felt so much discouragement at times with my involvement within the climate movement that I have thought about giving up and quitting.

The sense of reward I have received from lobbying

Yet, I don’t give up because I saw in that meeting with Rep. Ann Wagner’s staff that lobbying can be so rewarding. At that same meeting,  Jordan Fears, Field Representative for Rep. Wagner, turned to me unexpectedly to say: “We are so sorry that we did not answer your e-mails faster.”

I was touched by their statement. I am not major business owner in St. Louis employing lots of constituents. I am a lowly seasonal park ranger. Yet, they were still apologizing to me for not answering my e-mails quicker. It felt like they were treating me like a constituent of major importance in their district. I was humbled, stunned and speechless. If you have met me outside of this blog, you know I am longwinded and have lots to say.

Yet, Jordan’s comment was very gracious. Even with the high volume of correspondence they receive from other constituents, they felt bad not responding to me sooner. I was silence for a moment trying to comprehend his comment. However, my deep reflection did not last too long because I thanked Jordan for their concern as quickly as I could.

I have had other successes lobbying. Part of the enjoyment I get from lobbying comes from following Citizens’ Climate Lobby’s one rule: we only meet with members of Congress and their staff showing appreciation, gratitude, and respect. 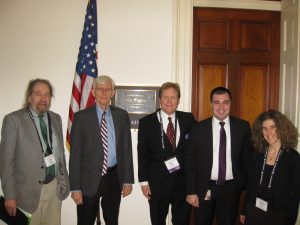 With using that CCL methodology, staff of Rep. Ann Wagner are always happy to see me in our lobby meetings. Even more, I had a breakthrough at the November 2016 meeting, with Kris Cook, Legislative Aide for Rep. Ann Wagner at her Washington D.C. office. During that meeting, Kris wanted my assessment of why did the Washington state ballot initiative 732 failed during the recent November election. I was a little caught off guard because I had prepared hard to just talk about CCL’s carbon fee and dividend proposal.

As I gave my knowledge and understanding of why Washington state’s I-732 fell short at the ballot box, Kris jotted down notes and he was listening very closely to what I had to say. I was turning into a trusted resource for this office. This conservative Republican office was not seeing me as another environmental lobbyist to be polite but ignore their requests once the meeting was over. After years of lobbying, this office like me and trusted my opinions.

On top of all this, when I announced on my Facebook page on September 11, 2016 I planned to attend the November CCL Lobby Education Day, my Facebook friend, Kimberly Bizon, quickly became interested. She asked me questions about the conference and then she commented, “Brian – It’s in November. I think I will register and join you!” Kimberly did register and I did see her at the conference. She seemed thrilled to be there. It was wonderful to meet her in person. 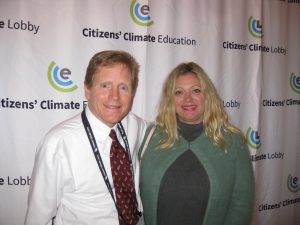 As I like to say, the reason why I take action on climate change is that hopefully it inspires others to take action also. Hopefully, when I lobby it inspires others to lobby and contact their member of Congress also. If enough of us are engaging our members of Congress, we will see significant action on climate change. Congress will then have the political will to pass a revenue neutral carbon tax, which greatly reduce harmful carbon emissions. 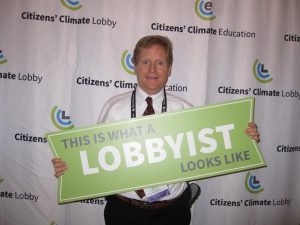