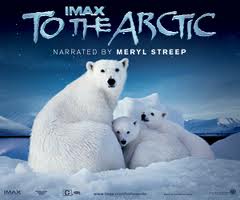 The Arctic or North Pole fascinated me for years since this region is on the front line of climate change warming.  According to the 2007 report by the Intergovernmental Panel on Climate Change, the average annual temperature of the Arctic increased almost twice as much as the average annual global temperature over the past 100 years.  Even more, according to NOAA, the summer Arctic sea ice has declined by 40% since 1979.  For several years now, the polar bear has become the ‘poster child’ for climate change since it hunts for seals on solid Arctic ice that is now rapidly sinking.  With their bright white color, living at one of the harshest climates on earth, and their propensity to hunt people if given a chance, polar bears have always fascinated me.

Thus, I was thrilled to hear this winter that an IMAX movie focusing on polar bears, To The Arctic,was coming to the St. Louis Science Center.  Since I worked at Science Center this winter, I recently got to watch To The Arctic.  With my interest in climate change, I was even more thrilled to read the film’s synopsis on the Science Center’s website that “To The Arctic tells the story of one mother polar bear’s determination to keep her cubs alive in the face of natural predators and a rapidly changing climate.”  I found this movie to be very inspirational with very beautiful shots of the frozen north. 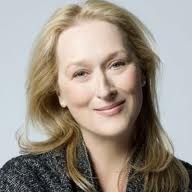 Besides, the movie was narrated by Meryl Streep, one of my top favorite actors.  The music was by Paul McCartney, one of my all time favorite musicians.  They both provide solid and fun contributions to the film.
The film was also produced and directed by Greg MacGillivay, who also made a IMAX movie that I really loved back in 2000, Dolphins.  This looked like an All-Star team to motivate me to see a film about polar bears and the Arctic.

I was also spellbound by the opening helicopter shots of the roaring waterfalls at the at the edges of the cliffs of ice.  Sadly, the film eludes to the greater flow of these waterfalls probably due to climate change.  As the film continued to show incredible Arctic footage, the film also stated that summer now in the Arctic now lasts a month longer than what it did just decades ago.  As the film showed sea life, it mentioned ‘greenhouse gases releases from thousands of miles away is making the ocean more acidic and tougher for the plants and sea stars to survive.’

The real stars of the movie though were the polar bears.  I loved the shots of the adults gracefully swimming in the water.  Who knew such a bulky land animal could swim so fluidly.  Of course, the shots of the polar bear cubs playing were so adorable.  The image that stuck with me though was the mother turning around to confront a male who was stalking her and her cubs.  She successfully convinced the male with a stern glare and stand not to mess with her offspring this time.  Unfortunately, the film informs us that often males are eating cubs more often, even if they prefer seals.  The mother’s steel determination to protect her young made me even more impressed with polar bears. 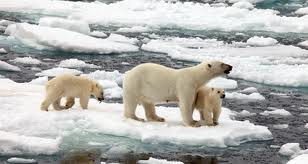 The central message of the movie about polar bears having a hard time adjusting to climate change seemed to be very effectively delivered.  It did not seem to me to be too preachy or depressing.  It just laid out the unvarnished truth about climate change in the Arctic.  The daunting threat to the long term survival of polar bears is the shrinking Arctic sea ice, now melting faster than ever.  Polar bears depend upon floating sea ice to catch their favorite meal, the ringed seal.  Unfortunately, the film shows that the distance between the sea ice is growing.  The warming is leaving bears ‘on thin ice.’  If the distance between sea ice is too wide, it becomes a deadly swim for the bears, especially the cubs.

By 2050, the Arctic ice cap will be reduced to just a small fringe on the coast of Canada and Greenland.  Few climate and Arctic scientists would dispute this fact stated in the film.  Some scientists are more cautious and say the Arctic will be ice free in the summer by 2080, others are looking at the trends in sea ice loss and projecting 2013.  Either way, this spells bad news for the majestic and awe-inspiring polar bears.

With the images and stark message, this is where the film challenges us to do what we can individually and collectively to reduce the threat of climate change.  For the film says, ‘Just as mother polar bear fiercely protects her young, perhaps it can inspire all of us to protect the Arctic habitat.’  I am not a parent, but the film certainly inspired me to do more.  Hopefully, this message of parental care will connect with mothers, fathers, grandparents, aunts, uncles, mentors, and teachers seeing this film.

For I love the written quote at the beginning of the film by renowned ocean scientist, Dr. Sylvia Earle:
“As mothers, the greatest gift we can pass along to our children is a healthy planet.”