Below is the text of a speech I gave at South County Toastmasters in St. Louis, Missouri on Wednesday, December 3, 2014.I am here
tonight with my special sword to slay a zombie. In popular movies and TV shows,
zombies are basically dead, decaying humans coming kill and eat you and me.
Zombie very scary for me because they are so gross and hard to kill, except if
you have a powerful sword like mine.
Even worse
than zombies, I find this to be even scarier: CLIMATE CHANGE.
Since the
industrial revolution 200 years ago, we mostly
burn fossil fuels, such as coal, oil, and natural gas, for our energy
needs.  When we burn these fuels, carbon
dioxide is released. Since 1880, science tells us that we have increased the amount
of carbon dioxide in our atmosphere by 40%.
Basic physics tells us that carbon dioxide traps the Earth’s heat. 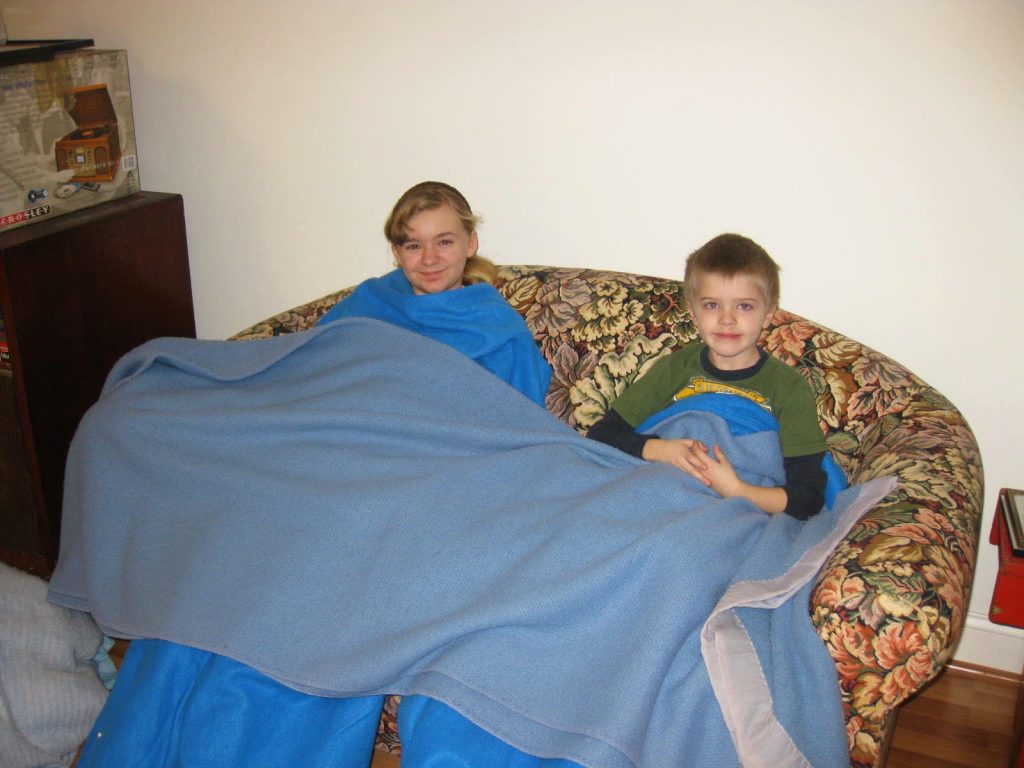 Just like wearing Snuggy blankets traps body
heat keeping my niece and nephew warm on a cold winter day. Increasing carbon
dioxide in our atmosphere by 40% is like throwing an extra blanket over our
planet, just like I am doing with my niece and nephew in this picture.Speaking of too many blankets, has anyone here ever waked up in the middle of the night feeling overheated from sleeping under too many blankets? This NASA video shows we are overheating the Earth putting too much carbon dioxide in our atmosphere. I will pause while it shows the changes in global temperatures from 1884 to today.

In other words, precise global temperature measurements show that we have gone
from this in 1884 to this today. 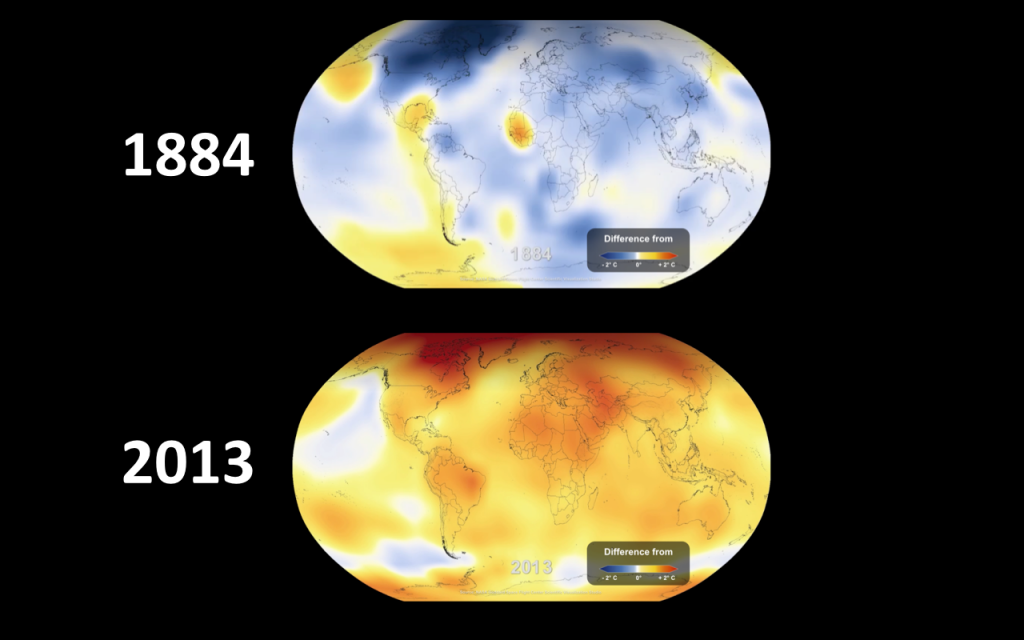 Just like
scary zombies coming after you and me, global temperatures have steadily
increased over our lifetimes. Since 1970, this graph below from Climatecentral.org shows the average surface temperature
of the planet has jumped up higher each decade. 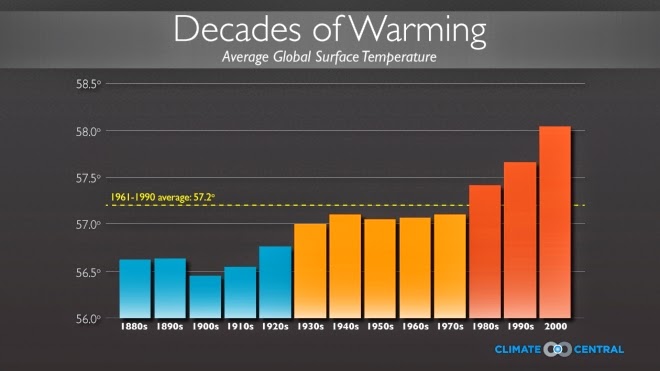 Even more,
since temperature records have been meticulously documented starting in 1880,
2013 tied with 2003 as the fourth warmest year globally. Currently, the warmest
year on record is 2010, followed by 2005. Only one year during the 20th
century—1998—was warmer than 2013.  What
really jumps out at me looking at this picture below is that including 2013, 12 of
the 13 warmest years on record occurred in the 21st century or since 1998. 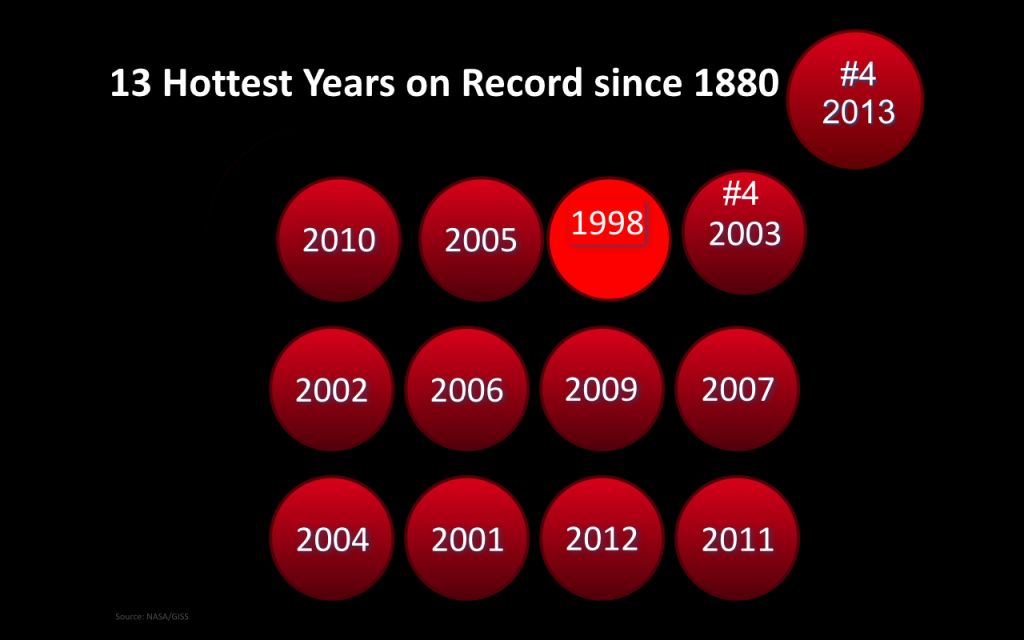 Yet, I have
frequently heard my fellow Toastmasters tell me this zombie myth:
The Earth as not warmed
since 1998.

Who has
heard that argument before? 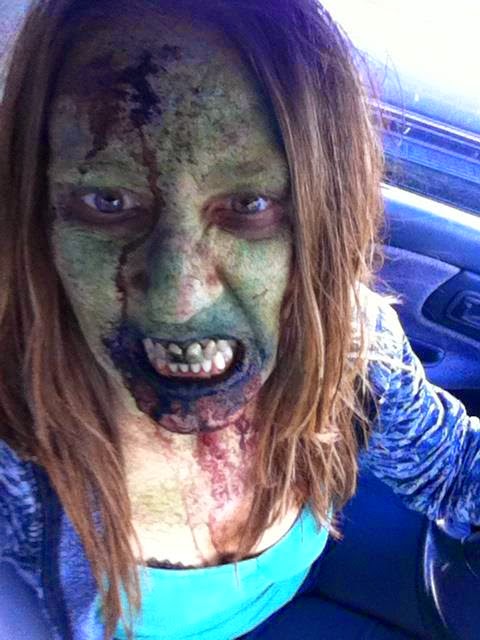 Unfortunately,
after my last speech to the Club in April, another Toastmaster cornered me with
this statement in a hostile way that made me feel like I was being attacked by
a zombie. Sadly, I did not have my sword to defend myself against that
Toastmaster.

However, Dr. Marshall Shepherd, climate scientist at the University of Georgia, has
a wonderful tool to slay the 1998 zombie myth in his amazing 2013 TED
Talk video, Slaying the Zombies of Climate Science.

In this
video, Dr. Shepherd talks about zombie theories. What is a zombie theory?
According to
Dr. Shepherd: “It is one of those theories that scientists have refuted or
disproven time and time again, but it lives on like zombies in the blogs, radio
stations, tweets, and I see and hear them all the time.”
Where does
this idea originate that the planet
has not warmed since 1998?
People who
reject human-caused climate change will point to 1998 on a graph and say ‘See!
The planet has not warmed up over the past 16 years.’ 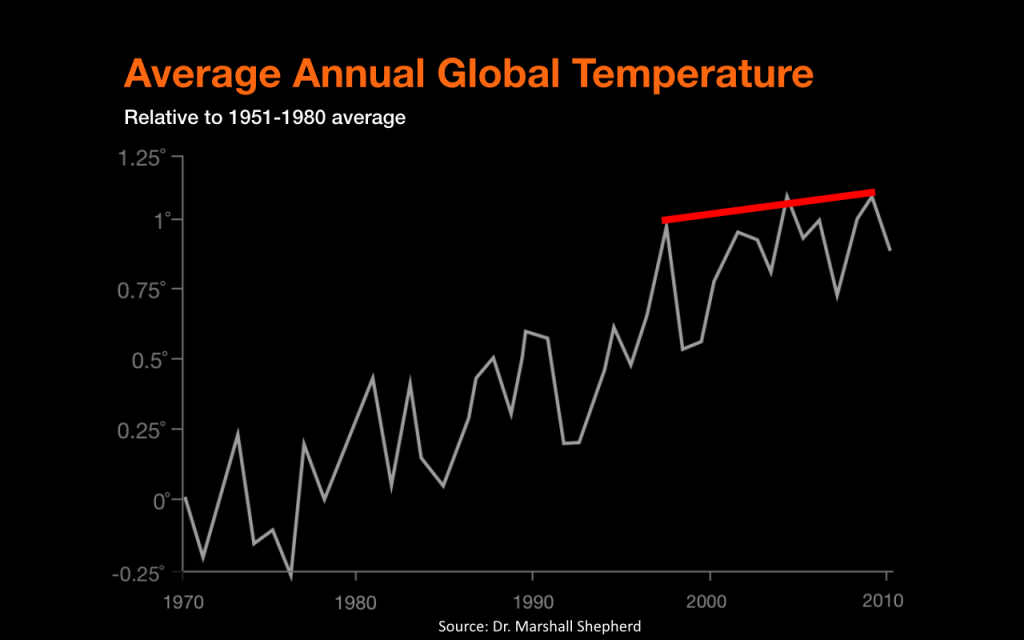 That looks logical to me looking at this graph. The problem is that climate scientists see the growth of a higher linear rate since
1970.  Even more, scientists look at
long term global trends of at least 30 years to 100 years at least know if
climate change is real.
Climate
scientists use the term ‘cherry picking’ for
those who point to the flatter warming since 1998. Cherry picking is
defined as the act of pointing to individual cases or data that seem to confirm
a particular position, while ignoring a significant portion of related cases or
data that may contradict that position.
Who is this?

Example of
cherry picking would be someone saying that St. Louis Cardinal great Stan
Musial does not belong in the Baseball
Hall of Fame because he had a mediocre .280 batting average for his last
five seasons. However, you overlook his outstanding .331 average for his 22
year career. Nobody in St. Louis would be happy with someone cherry picking Stan Musial’s stats. Neither should we do this with climate science.

According to
Dr. Shepherd or numerous other climate scientists I have met, they will tell
you that yes, the climate has changed before. However, they are worried about
the current rate of change, especially over the last 11,000 years.
This graph below, e-mailed to me by Dr. Shepherd, shows a simplified representation around 10,000 years ago, the
temperature rose about 1 degree over 1,800 years. It then reached a plateau for
4,000 years, then it dropped 1.3 degrees over 5,400 years, and it spiked 1.3
degrees over the past 100 years with the burning of fossil fuels. Scientists
are troubled by the rate of warming happening
now in decades in what used to take thousands of years. I calculated this
rate of warming as currently 23 times faster than when the Earth naturally
warmed a similar amount around 10,000 years ago. 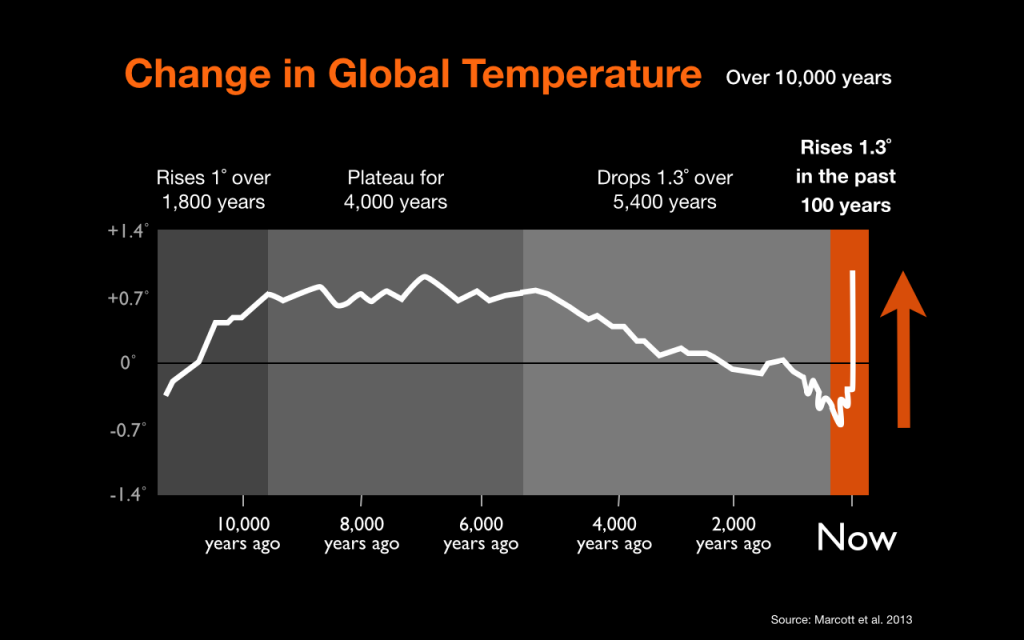 Scientists
are very worried about the rate of change happening with climate change, just
like I am scared of zombies because they are GROSS, HARD TO KILL AND WANT TO
EAT US.

However, I can now overcome this zombie fear by
slaying them with this sword! Even more, I am so happy we can slay this 1998
climate zombie theory.

Besides the
sword I brought here tonight, the best
weapon I know slay this zombie theory is this Scientific American headline I saw last October while I was preparing this speech: 2014 On Track to Become Hottest Year on Record.
With my sword,
here is why we can slay this zombie
myth that ‘There has been no warming
since 1998.’
1. 2010,
2005, and possibly 2014 are all warmer years than 1998.
2. Since the
1970s, the average surface temperature of the planet has jumped up higher each
decade.
3. Isolating
1998 to 2014 is too short of a time period to say it is not warming.

Climate is determined by compiled weather
statistics over a 30 year period.

As we talked
about earlier, no one in St. Louis would be happy with someone cherry picking
Stan Musial’s stats. Neither should we do this with climate science, especially
since climate scientists see a higher
linear growth rate since 1970.
I may still
have nightmares about these zombies. 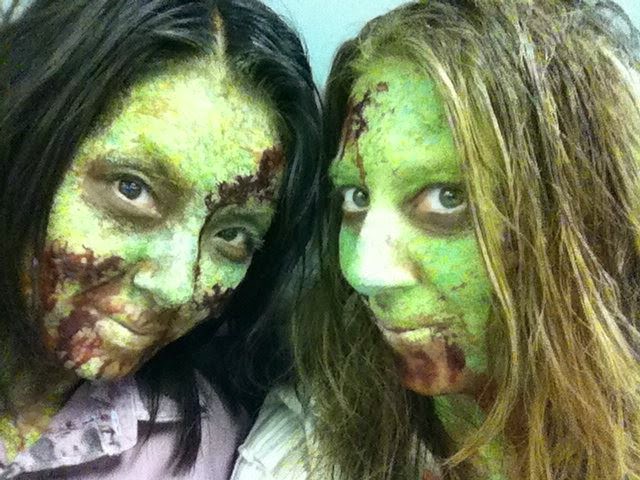 However, with the help of climate scientist Dr. Marshall Shepherd with his Slaying the Zombies of Climate Science Ted Talk and my amazing sword, we can now victoriously slay the myth ‘There has been no warming since 1998.’

5 thoughts on “Slaying a Zombie Theory: ‘Earth has not warmed since 1998’”